Frost/Nixon: Heats Up the State

Direct from Broadway, Frost/Nixon runs at the State Theatre in Minneapolis for a limited eight engagements January 6-11.

Several years after he resigned from office in 1974, the world watched as former President Richard Nixon got the trial he never actually had. In a series of TV interviews in 1977, famous British talk-show host David Frost elicited a public apology from Nixon for the Watergate Scandal in a stunning showing of nerve, wit, and intelligence. The nail-biting battle of intellects tells the story of how Frost provoked Nixon to do so. 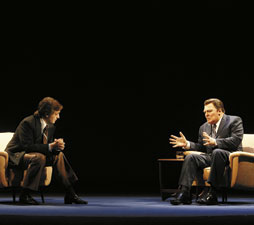 The play Frost/Nixon, by Peter Morgan, award-winning screenwriter of The Queen and The Last King of Scotland, originally was staged in the UK in 2006. Debuting in a sold-out run at London’s Donmar Warehouse before transferring to the West End, it won a 2006 Evening Standard Award.

Opening on Broadway in 2007, Frost/Nixon played a limited five-month engagement, garnering Tony nominations for Best Play and Best Direction. The New York Post called it “a prize fight you watch with the kind of fascinated delight rare in the theater.”
The play inspired the new Ron Howard film of the same name.

Now touring, the theatrical version of Frost/Nixon stars Stacy Keach as Nixon. Keach is the winner of two Oscars, three Obies, and a Golden Globe. John Huston once said Keach “is not a star. He is a constellation. The audience will come to see whatever character he portrays.” Keach most recently appeared in the sitcom Titus and the drama Prison Break. Playing David Frost is London native Alan Cox, who has acted with the Royal Shakespeare Company and Chichester Festival Theatre.

Why settle for the movie when you can experience the original play live?