Frock the Vote a Worldwide Success!

On November 3, Wanda Wisdom hosted a live webcast on wandawisdom.com, providing campy Election Night news coverage. Hundreds of viewers from around the world tuned in, called in, chatted, and partied with their favorite drag queen, as election results came in. Here are some of the highlights: 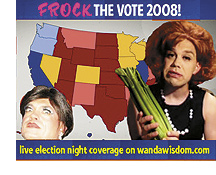 • The webcast lasted a total of 4.5 hours.
• It was seen on 558 computers (the actual audience was larger, because many people watched with friends and at Election Night parties).
• We heard from viewers throughout the United States, as well as England, Ireland, France, Spain, The Netherlands, Japan, Australia, Canada, Mexico, Italy, and other parts international!
• Viewers participated in a live chat room, alongside the webcast, asking questions, and offering thoughts about the results.
• A live interactive poll allowed listeners to participate in the fun, and share their opinions.
Here are some of the comments we received:
• “It was a great webcast, Wanda. You were a gracious hostess.”—Luke, Australia
• “I thoroughly enjoyed last night. Being in the UK, it meant I was up until 5 AM, and I am feeling just a little rough today, but it was worth it….It was like an extended family gathering. It was kinda like one of your movie nights…just worldwide!”—Steve, UK
• “You, Phyllis, and Adam provided an excellent and entertainment-based alternative to election coverage. You should really be proud of what you have done.”—Marcus, Minneapolis
• “Thank you, WANDA, for a Fabulous Frock the Vote!”—Donald, Arizona
• “I really enjoyed the show. Was an excellent way to follow the coverage.”—Paul, UK