The 17th annual Minnesota Fringe Festival offers a rich variety of queer treats, as well as some others that will resonate with current GLBT concerns. It’s packed with plays, dance performances, and comic acts that run no longer than an hour. Performers from across the nation and beyond will strut stages in both Twin Cities at various venues. 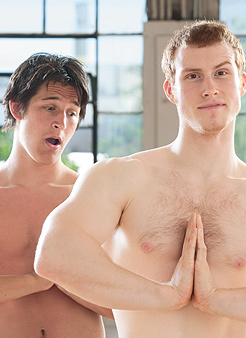 Children’s theater for nontraditional families is fun for youngsters, as well as good for those of us who grew up without such images to see, and reflect on our own conditioning.

Andrew Waldron and Jill Whitney-Birk’s queer adaptation Open And Affirming Fairy Tales: The Fabulous Fables of Rainbeau Bay subverts binary demands for “either/or behaviors” and identity. The Princess and the Frog is reimagined with two dads. The Fish and the Fisherman is revamped to examine how little boys are driven toward ultramacho “acting out.” The Golden Goose is reinvented as a boy getting to date a handsome prince.

Playwright Kate Elise’s interactive MisMatched involves a tomboy and a very sensitive boy whose friendship bond is tested at the science fair and on the football field.

Aladdin and the Magic Lamp’s teen cast from Kansas salutes the style of playwright Harry Kondoleon, who died of AIDS at 39 in 1994. His Obie-winning The Brides uses fairy tale-like segments.

In light of my recent Courage exposé in Lavender, older teens and all adults must see (Disordered) Thy Name is Teenager, a Blank Slate Collaboration that piercingly examines teens identifying with their mental illness in a time when overmedication is the norm for many. Director Adam Arnold says developing the show made him more aware of how queer youth often still are seen as mentally ill. Ironically, the American Psychiatric Association declassified homosexuality as a mental illness in 1973.

Julie Mann’s Mixed Reality: My Multi-Racial World is inspired by Mildred and Richard Loving, whose interracial marriage case compelled the US Supreme Court to declare all miscegenation laws unconstitutional in 1967. Present parallels are striking, given recent Republican platforms in Montana and Texas that call for making same-sex marriage illegal.

Actress Michelle O’Neill, who was the best local cameo-role actor last year in the Guthrie’s The Intelligent Homosexual’s Guide, directs Skiing on Broken Glass, acted by Max Polski and Joel Liestman. Playwright David Goldstein muses, “Youth and beauty can be as powerful as that which comes with age, wealth, and social position. This dynamic is reflected between escorts and the men who hire them. What happens when what starts as a business interaction develops unexpectedly into a loving relationship? In such a relationship, more than in others, perhaps, each person has unique vulnerabilities that are easily exploited, sometimes devastatingly so. ‘You’re nothing more than a cheap hooker’ versus ‘You’re a sad old man that can only get sex by paying for it.’ In their own way, each holds a terrifying power over the other.”

From LA, The Adventures of Les Kurkendaal addresses alcoholism and drugs in the gay community. Dealing with discrimination can be painful, and intoxicants help numb that pain.

Meth for Dummies’s Robert White says, “I produced this play to let audiences know the human cost of meth. Even chem dep professionals have commented it deepened their understanding of the disease.” John Pigate stars. Harry Waters Jr., of Angels in America fame, directs.

Director Paul Von Stoetzel, whose fascination with bisexual filmmaker Rainer Werner Fassbinder’s power dynamics influenced his Fringe choice, says, “Cruelty is often implicit in a master/slave relationship, which we see in Marcus Anthony’s Medea Ex Machina.” Dashing Andrew Sass, brilliant in the pansexual film FAUX, plays a manipulative director who casts his wife as Medea. He sleeps with her female coactress, in Von Stoetzel’s words, “to attain more control over her, so she is more devout and submissive.”

Though it’s hetero, See You Next Tuesday’s look into a couple with differing styles of political expression—and lack thereof—can benefit GLBT folks. Playwright Steve Moulds asks, “What does it say about me that I don’t feel that intensely the need to make points, to let things slide when I disagree. Is it social cowardice?”

In Mac Wellman’s Sincerity Forever, a love scene between a boy and girl is transplanted into the mouths of two boys later in the play.

The gifted Janelle Ranek’s Yard Sale takes a comic look at a lesbian and her old straight male fling.

Jeffrey Peterson reprises his wonderful dance work Thinkingaview. Its intriguing use of partnering melts the boundaries.