We rightly applaud established theaters for staging queer plays, but it’s crucial that more experimental, grassroots queer work gets nurtured. That’s why the Minnesota Fringe Festival is so vital for tracking currents cutting the edge of the queer zeitgeist. 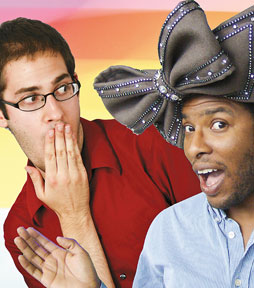 Fringe Festival Communications Director Matthew Foster calls it a “proving ground for new talent and new voices, especially for people who for whatever reason don’t have the résumé or wherewithal to access a big established theater.”

Same-sex marriage gets warm laughs in Joanie Loves Chachi. Playwright Robert Thompson centers on two brothers. One is gay and getting married, while the other, in Thompson’s words, is “very not gay, and very not on board with the proceedings. For these two, it’s kind of like Richard Simmons colliding with Dick Cheney.”

A black straight woman gets impregnated by her white gay friend in Oops, with Colin Waitt—who wrote the script—and Jasmine Rush. Waitt says, “As a gay man, an unplanned pregnancy seems like nothing I’d ever have to worry about. So, I thought it would be great fodder for comedy to create characters like me and my friends, and see how they have to deal with it.”

Trans actors perform Lane McKiernan’s Food Shelf Follies, drawn from real-life experiences. What happens when competing identities and issues within a single person affect one’s well-being? Being disabled, being trans, and being poor present their own specific, separate problems.

When playwright Rachel Nelson workshopped her pansexual Mammal Stories, she realized that “the process of coming out as yourself can be terrifying for anybody—straight, bisexual, or deeply queer. In the privacy of our own homes, we all have atypical identities, and we all have atypical sexualities.” 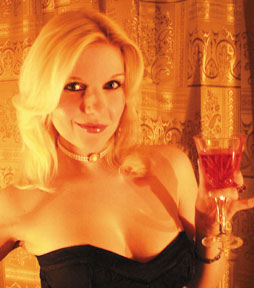 Asked if his solo show Moby Dick Tonight! honors the intrinsic homoeroticism within Herman Melville’s milestone novel, adaptor Loren Niemi answers, “Yes. I am not shying away from it. I treat the homoerotic relationship of Ishmael and Queequeg as a given.”

Kentucky’s Dan Bernitt and LA’s Les Kurkendaal give us The Gayer Show. Bernitt shares, “Les cracks me up. He sent me his portion of the performance, and I wrote my monologues around the ideas he explored. What’s so interesting to me about the piece is that though Les and I are 20 years apart, our experiences are surprisingly alike.”

Bernitt also reprises Phi Alpha Gamma, his chilling solo piece on frat boy homophobia, which was a finalist for the Lambda Literary Award in Drama.
Peter Neofotis takes on frats, too, in his solo piece Concord, Virginia. He explains that protagonist “Simon Donald is put on trial after a few fraternity brothers walk in on him performing oral sex on his lover, who, embarrassed, feigns that he was passed out, and panics. Mr. Donald is also the town’s prized rose gardener. The friends he gained through his gardening, including some grand Southern matriarchs, banish old prejudices, and defend him in court.”

Brian Columbus and Nancy Ruyle wrote The William Williams Effect, based on the 1905 transcript, letters, and news articles about the last man executed in Minnesota. Columbus notes, “The precise relationship between Williams and teenager Johnnie Keller remains ambiguous to this day, likely a result of family dynamics, as well as taboos around homosexuality at the turn of the last century. Despite what appears to be some acceptance early on of Williams’s presence in Johnnie’s life, we know that his parents tried to separate him from Williams on numerous occasions.”

Top-notch gay satirist Dennis LeFebvre, of the zany Marvel Ann troupe, waxes lesbianic with The Bee-Lievers, a dark comedy about Julie Fast (Kelly Gilpatrick), a closeted teenage girl who joins a les-bee-an bee-worshipping cult in the early ’70s. He observes that it addresses “obsession with ‘the second coming,’ and how everything can be interpreted as ‘a sign.’ I wanted to explore the Christian notion of an afterlife, and how fears about it can be exploited.” Kushner Celebration star Jim Lichtscheidl directs the all-female cast. 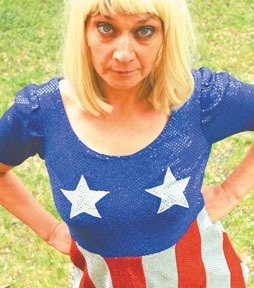 Iconic performer Heidi Arneson’s GRRL! lets loose on the breakdown of language and the proliferation of plastic. She tells us, “From S&M games with neighbor boys to lesbian costume parties to making love with partners made of plastic, GRRL! gets her groove on in any way she possibly can. Not to be cubbyholed, not to be downsized, not to be made extinct, this raging female exemplifies the pratfalls and poignancy of a human heart trying to connect, in the face of past shame, present consumerism, and future disaster—all while donning a series of fabulous outfits.”

Fringe Encore Winner Allegra Lingo updates Greek myth in Crescendo. According to her, it’s “interwoven with small glimpses of my life with my fiancée, Amy, and our dog, James, as we continue to carve our own place in the world, and plan our life together in the face of a society which doesn’t quite understand or accept us for either our sexuality or our commitment to our arts: me, the writer; she the knitter.” Crescendo incorporates gay composer Aaron Copland’s transcendent music.

Iconoclastic Mic Weinblatt points out that his new play triptych Needs, Wants, Desires “was conceived with the notion that gay people seem to be looking for similar things: a flawless body, an object of desire, and the perfect partner. Latana [Renee Karen Werbowski] in Needs discovers a repairman in the doctor’s office, and in a desperate attempt for image validation, allows him to thoroughly examine her body. When the real doctor appears, she decides to stay with the Dunwoody graduate, because he’s more familiar with her body. In Wants, when a strange object is delivered to June and Ward’s new home, it brings out the latent bisexual tendencies in both of them, as they deliberate where to ‘put’ the object for maximum satisfaction.”

Weinblatt lovers will like outrageous gay playwright Christopher Durang, whose classic The Actor’s Nightmare spins characters described by director Carney Gray as “‘hypersexual.’ He does this in an effort to unhinge social attitudes toward sexual behavior.” Gray also plays the role of George as gay.

In similar spirit, Professor Damon Rudman, creator of The Problem of the Body, remarks, “We are mired in conventional outlooks. My mission is to flush them away with a torrent of provocative evidence from societies that were much more open about bodily urges. I touch on the advent of modern gay identity in early 1700s and lesbian ‘Boston Marriages’ in the late 1800s. Throughout history, the ideal of resisting or ‘rising above’ bodily appetites has been repeatedly employed to differentiate. Projection of repressed desires onto ‘others’ has time and again abetted all manners of bigotry. It has also been divisive within individuals, compelling many to compartmentalize, to construct public masks behind which they struggle to hide their shameful private ‘failings’ from others and often from themselves.”

Two stellar young directors are worth checking out. Paul Von Stoetzel stages The Underachiever’s Manifesto, which reflects on the suicide of Freddie Mac’s David Kellerman. Amanda Sterling tackles sexual revolutionary August Strindberg’s Dream Play. Face it: You have to catch a classic play at Fringe, and this is one I’d bet on.