Friedlander: Photography, now in its final week at the Minneapolis Institute of Arts (MIA), is a must-see exhibition, exceptional for the sheer mass and time span of the artist’s works, from the 1960s to the present.

Born in 1934, Lee Friedlander is, in fact, still at work after more than a half-century of capturing images ranging from the monumental to the personal to the idiosyncratic and wryly humorous. The photographer’s interests include music and literature, as well as the visual. MIA has drawn on its extensive permanent collection to display many of the more than 27 trade and numerous limited editions of his work. 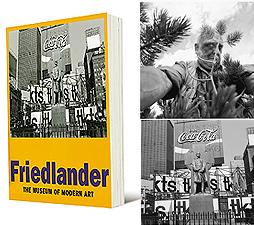 Friedlander: Photography originally was curated by Peter Galassi in 2005 for the Museum of Modern Art (MoMA) in New York, where it debuted before showing in Germany, France, and Spain. Galassi’s essay in the exhibition catalog, “You Have to Change to Stay the Same,” offers an in-depth account of Friedlander’s career.

The photographs are presented by decade and by category, i.e., “1960s: Portraits.” Seeing a number of images together in a category allows the viewer to comprehend the wit and insight that go into a seemingly random shot. Indeed, a cursory glance often elicits a response of, “Well, gee—I could have taken that.” It is only when one observes the image closely, and then in context with others in a series, that understanding comes: “I could have taken that…but I never would have thought to.”

Take, for example, Friedlander’s 1980s “Letters from the People” images. They are literally that: signs, graffiti, random, purposeful, on doors, storefronts, walls, and hoardings—all manmade marks any of us might pass by every day. These photos are for the taking by anyone with a camera, but how many would take notice, and pause to pursue the image? Friedlander’s gift is to see the story—the humanity, if you will—embedded in the quotidian, and then to stop and capture it.

The photographer’s 1970s “The American Monument” series brings august historical figures into quixotic and unexpected juxtapositions with the very modern-day society they were instrumental in birthing.

In Father Duffy, Times Square, New York City, 1974, the famed military chaplain stands foursquare behind his spiked square railing, hemmed by buildings looming about him, his name muted and barely visible on the plinth, as the viewer’s eye is drawn to the enormous “Enjoy Coca-Cola” sign overhead, and beyond to the seemingly random sans-serif, lower-case letters on the white boards behind him.

With the exception of a number of portraits of musicians, all the photographs are black and white, taken with either a Leica 35mm range-finder, or a 2 ¼” medium-format Hasselblad Superwide camera that Friedlander adopted in the early 1990s, and used, on occasion, to chilling effect.

In the “Self Portrait” section, Friedlander the photographer is turned into something Other, the view of himself glaring through pine boughs through the Superwide lens turning positively demonic.

Galassi prefaces his fine essay with a telling Friedlander quote: “I only wanted Uncle Vern standing beside his new car [a Hudson] on a clear day. I got him and the car. I also got a bit of Aunt Mary’s laundry, and Beau Jack the dog peeing on a fence, and a row of potted tuberous begonias on the porch, and seventy-eight trees, and a million pebbles in the driveway, and more. It’s a generous medium, photography.”