Following in the Footsteps of Rugby Pioneers

One day seven years ago, Kerri Heffernan went for a run. Her path took her past an athletic field in Providence, Rhode Island, where the Brown University women’s rugby team was training. 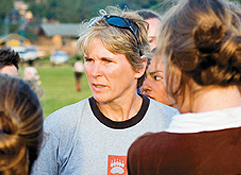 Heffernan—who, prior to becoming Associate Director of Brown’s Howard R. Swearer Center for Public Service, had been an international level rugby player—was appalled at how poorly the Brown squad played. She offered to help.

Today, Heffernan is the team’s head coach. Under her leadership, it has qualified for three national championships. This spring, it reached the Final Four. She has coached three All-Americans and four national team players.

Along the way, Heffernan has seen some stereotypes shattered—and others reinforced—about a sport whose players long have been viewed as the poster children for lesbian athletes.

Heffernan grew up running track. But when she became disenchanted with the program at Florida State University as an undergraduate in the late 1970s, she gravitated to rugby.

“It was a wonderful environment for serious athletes,” Heffernan recalls. “The women who coached us were good teachers, and very patient. They helped us fall in love with the sport.”

After graduation, Heffernan moved to Houston and Boston to play with top teams. She competed for 10 years, including internationally.

Although, in Heffernan’s words, it was “a great ride,” still, she points out, “when I played, tournaments could be horrific. The men wore nasty T-shirts, and there was lots of drinking.”

That was one way, Heffernan adds, by which men tried to keep women out of what they considered to be their own very macho sport.

Times have changed. Many of those men now have daughters, and fathers have encouraged their girls to play rugby. Dads have been involved in youth leagues, and their daughters keep playing in high school and college.

Today, Heffernan says, “They’re less likely to dismiss female players as ‘a bunch of dykes.’ The game is being taken very seriously, and it’s attracting plenty of great athletes.”

At Brown, as at other schools, women’s rugby appeals to many former lacrosse and soccer players “looking for something different—not a lockstep experience,” Heffernan notes.

What they find, Heffernan relates, is “a subculture in which people are fine with a vast variety of differences. There’s something very heroic about playing rugby. If you can hit hard, and protect your teammate, you’re embraced. That leads to a great acceptance of all the women who play it.”

Acceptance extends to sexuality, as Heffernan recounts: “I played with the pioneers of the game. At that time, women were more out in rugby than other sports. Rugby was welcoming to butch women. And straight players were wonderful allies.”

That embracing of lesbians still exists to a certain degree. However, as the sport has exploded—according to Heffernan, approximately 500 colleges field women’s rugby teams at the Division I level—it has attracted women for reasons beyond its embracing of sexuality differences.

Yet, a certain sensibility remains. Like many programs, Brown’s is very social. From the first events on, “newcomers get clued in” to the accepting atmosphere, Heffernan observes. “I don’t have to say anything.”

Heffernan’s outness helps. Her partner and children attend many events. The coach introduces her family to parents of players.

“For some people, that may be very challenging,” Heffernan allows. “But it makes a huge difference to all our players, gay and straight.”

Two years ago, the Brown team traveled to Uganda, where it played various clubs.

“The gay players there quickly connected with our lesbians,” Heffernan shares. “It was really poignant and exciting to see. The fact that rugby facilitated that connection was fascinating.”

Afterward, Heffernan and her players had intense conversations about the freedom Americans feel to be out, in contrast to Africans, for whom the dangers of visibility are enormous.

Heffernan is looking for a certain type of player, and it has nothing to do with sexuality.

“I pay attention to the ability to focus,” Heffernan states. “Rugby is an intellectually challenging sport. There are a ton of rules—many of them counterintuitive—and you have to really concentrate on them, knowing at the same time you’re about to be hit.”

Heffernan, who also looks for physical skills, including good footwork, comments, “It’s not just about finding big girls anymore. We never cut—there’s a spot for everyone in the Brown rugby program—and size is no longer the main criterion.”

Many Brown athletes did not grow up playing contact sports.

“Hitting someone is very intimate, and at the same time very liberating,” Heffernan explains. “Some women feel very empowered by that.”

Despite women’s rugby’s history, that empowerment has nothing to do with being a lesbian.

Dan Woog, a journalist, educator, soccer coach, and gay activist, is the author of the “Jocks” series of books on gay male athletes. Visit <www.danwoog.com>. He can be reached care of this publication, or at <[email protected]>.