William Ivey Long has won the Tony five times for costume design, surpassed only the late Florence Klotz, who won six Tonys. He has been nominated 11 times. He worked in Minneapolis alongside legendary Guthrie costume designer Jack Edwards, for whom he has great and fond regard, in the 1970s. 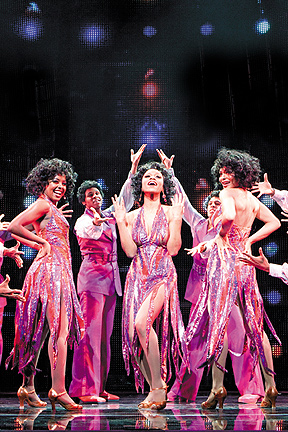 Now, Long continues a glorious career with his acclaimed design for the international tour of the revival of Dreamgirls, now at the Orpheum, directed and choreographed by Robert Longbottom, with cochoreography by Shane Sparks. It’s a musical that holds a unique place in Long’s heart.

Lavender recently spoke with Long about Dreamgirls and his cornucopia of memories.

Your first contact with Dreamgirls was when you were designing the original Tony-laden Broadway production of Nine, which has just opened as a movie with major Oscar buzz.

You always go back to the first big thing that changed your life—and the first big, big musical. I came to New York in 1975 right out of Yale Drama School, and five years later, I had Nine, the musical, directed and choreographed by Tommy Tune. That changed my life, because all of a sudden, it worked. It hit the big picture. People identified with it, and thought it was great, and I was just walking on air, because it was a very difficult birth. The show didn’t have an intermission, and they truncated and added—trial by fire. But it opened.

We shared a wall, the back wall of the 46th Street Theater, which is now the Richard Rodgers Theater, with the same wall as the Imperial Theater, where Dreamgirls was playing—both world premieres, both based on something else: Nine on Fellini’s film 8 and a Half; Dreamgirls on The Supremes. I mean parallel, parallel, parallel. And the battle between Tommy Tune and Michael Bennett was the big fight to watch. It was the big prizefight coming right down to the Tonys.

They were actually not at all alike in any way, but they became the big ones to watch. And I was in awe of [costume designer] Theoni Aldredge’s work in Dreamgirls; Tharon Musser’s lighting; Robin Wagner’s scenery; and, of course, Michael Bennett’s direction and choreography. I was just in awe of it, and I found myself sneaking in there, and watching it from backstage, because I knew everybody over there.

There was a lot of tension, a lot of animosity, except there I was with my big eyes looking at this magical work, never thinking I would win the Tony Award that year. Talk about an upset! I was great friends of Theoni, by the way, and I mention her in my bio in the playbill: “Hats off to Theoni Aldredge, the legendary designer of the original Dreamgirls!” I did the same with Ann Roth with 9 to 5, because she did the film.

That’s right. That musical was actually adapted from the film. There’s synchronicity in your career.

I try to line up the spirit world. I’m paying homage to my predecessor.

Then, will we be seeing a re-creation of the original?

They didn’t want to re-create. They wanted a whole new conception of Dreamgirls. And Robin Wagner, who designed the original, has totally rethought and reshaped the very fluid flowing and the telling of the story. So, Robin, is still on.

Robin designed for the original Dreamgirls twin towers, and they moved around the stage, and created different relationships, implying the inside of a building, the outside, doorways, and an up-and-down fire escape like in Jersey Boys. Jersey Boys sort of morphed that idea. Studio 54 had one like that. So, it was of the moment, really cutting-edge. Towers and big rising platforms made it very cinematic.

Since then, God invented the LED screen, so now, Robin’s done amazing things with panels. If anything, it’s more fluid, because of the technology. And my quick changes are even quicker. [Laughs] The fastest one is Effie’s “I Am Changing” song, which actually is about changing her attitude, and she literally changes her costume. They go to a pinpoint [lighting] on her face, and her costume changes when it pulls back up. It’s a whole new costume. So, it’s even faster now. [Laughs]

Did you look at costumes from the original production for your research?

And yet, there are some iconic moments when Theoni just got it right. Specifically, the finale, when they’re wearing white dresses. Now, they’re my white dresses. They’re cut differently, but they are white beaded gowns, and they do reference Billie Holiday. But Theoni put all three together, so, therefore, it’s a complete homage to her. While not in my mind, referring to Theoni, we both went back to the same source material. Like in [the song] “Heavy,” I noticed that they look a little similar. We both went back to the same Supremes costumes from the exact period. It goes from 1964 to 1978. It was a very lush, rich design explosion. I think it’s the greatest period of original design in recent American history.