The travel and tourism industries have suffered severely in recent months, as cash-strapped consumers pull back on discretionary spending and either cancel vacations or plan them closer to home. But if you’re looking for an inexpensive getaway to a GLBT-welcoming city, there’s rarely been a better time to travel, especially for U.S. citizens planning international getaways. 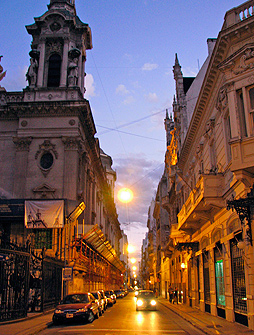 The American dollar has gained strength against most major currencies since fall 2008, making forays into the United Kingdom, Canada, and Mexico especially affordable. The long-affordable South American metropolis of Buenos Aires continues to rank among the world’s leading gay-friendly travel bargains. And if you’d rather not travel abroad, consider glitzy Las Vegas—it’s one U.S. city that’s now working extra hard to entice travelers with super-low hotel rates and package deals.

Here’s some advice on how to stretch your dollar in five notable vacation destinations:

Buenos Aires, Argentina
The Argentinean peso is very weak against most currencies, meaning that great deals on wine, meals, leather goods, and clothing abound in sophisticated Buenos Aires. Many of the high-end business hotels in the city’s ritzy Recoleta neighborhood charge the same steep rates you’d pay in any major international city, but if you avoid big chain properties and stay in one of the more charming areas like Palermo Viejo and San Telmo, you can find some amazing bargains. And these two neighborhoods contain the bulk of the city’s gay clubs, trendy eateries, and quirky boutiques.

High-end, GBLT-friendly properties that generally offer plenty of great value include the Axel Hotel in San Telmo, and the Vain Boutique Hotel, 1555 Malabia House, and the Five Cool Rooms Hotel, all in Palermo Viejo. For inexpensive dining, simply stroll along the blocks off Plaza Palermo Viejo, where trendy and affordable restaurants abound.

Taxis are another great value in Buenos Aires—they’re barely more expensive than public transportation in cities like New York or London. Getting to Argentina from North America is costly, but the dependable and well-run Chile-based airline LAN (part of the OneWorld Alliance) often offers attractive specials from its North American gateways of Los Angeles, Miami, New York, and Toronto—fares sometimes dip below $700 round-trip.

Las Vegas, Nevada
Once characterized by rock-bottom-discounted hotels and cheap buffets, Las Vegas became considerably more expensive in recent years as celebrity chefs opened fancy restaurants and developers built some of the most lavish casino resorts in the world. The city has been hit hard by the weak economy, however, and many of the swankiest new properties in the city—the elegant Trump International Hotel & Tower, the Palazzo, and Encore—are offering highly competitive rates these days.

The city’s top restaurants still feature plenty of super-pricey dishes, but Vegas also has a nice selection of desirable, reasonably priced eateries. Buffets at the Mirage and Treasure Island have high-quality ingredients and trendy designs—the prices at these spots are more than reasonable. And many of the famous chefs in town have less pricey venues, such as Hubert Keller’s hip Burger Bar at Mandalay Place, Mario Batali’s romantic Enoteca San Marco wine bar at the Venetian, and Tom Colicchio’s designer-sandwich joint, ‘Wichcraft, at MGM Grand.

As long as tourism numbers continue to fall flat, enterprising Las Vegas business owners will continue to entice travelers with inexpensive package deals, discounted tickets to shows, and reduced cover and drink charges at the city’s top gay clubs, such as Krave and Piranha. Las Vegas has direct air service on just about every airline in the country, so competition is fierce, too. Gay-friendly Southwest Airlines has been especially aggressive in offering great Vegas fares.

Manchester, England
Compared with the other cities in this article, Manchester is still relatively costly. But this major gay destination—the setting for the original Queer As Folk series—is far less expensive than London, and because the British pound has fallen precipitously against the U.S. dollar, a hotel room that would have cost you US$200 in fall 2007 might set you back only US$150 today. For that matter, a venti latte at Starbucks has come down from around US$8 to nearly US$5. In other words, travel in Manchester now costs roughly the same as it does in higher-end U.S. cities like Boston or San Francisco, and that’s good news for anglophiles who’ve been effectively shut out of the United Kingdom in recent years because of sometimes unbelievably high prices.

Some gay-friendly accommodations in the city that have suddenly become a good bit more affordable include the regal Radisson Edwardian and, just a few doors down, the city’s grande dame, the Midland Hotel. Both properties lie within walking distance of Manchester’s vibrant Gay Village along Canal Street, where the pints of local bitter and lager have always been a good value.

If you’re looking to combine your visit to Manchester with some sightseeing in other gay-popular European cities, check out the deals offered by regional discount airlines. These include Bmibaby, with service to Prague, Edinburgh, and Barcelona; Brussels Airlines, which flies from Manchester to Rome and Berlin; and Ryanair, offering cheap flights to Dublin and Marseille. There are dozens of others—the website www.euroflights.info is a handy tool for finding them.

Although this bustling resort community has become a bit more expensive as it’s gained in popularity, it remains less costly than many other alluring tropical getaways, such as the Caribbean and Hawaii. Right in Zona Romantica, the stellar gay resort Casa Cupula excels as much for its stately accommodations as for its friendly, knowledgeable, and charming staff. If it’s a large, upscale resort you’re seeking, try the swanky and gay-friendly Marriott CasaMagna, which is just a short cab ride from the airport and enjoys an enviable oceanfront setting.

During the prime winter high season, flights to Puerto Vallarta cost anywhere from $300 round-trip from Los Angeles or Dallas to $500 or so from New York City and Toronto. If you’re willing to visit during the less-popular but still enjoyable late-spring or early-fall shoulder seasons, you can save quite a lot of money on flights and hotels. And visitors who come during the quiet summer months find especially enviable bargains.

Quebec City, Canada
Just three hours from Montreal, the small French-speaking city of Quebec is also within a day’s drive of several major metropolitan areas, including Boston, New York City, and Toronto. You definitely don’t need to leave North America to enjoy a truly French vacation, and if coming from the United States you’ll also be rewarded with a favorable exchange rate in a city that already maintains a reasonable cost of living. The Canadian and U.S. dollars were nearly equal over the past few years, but U.S. currency enjoyed a major rally late in 2008—now you can expect accommodations, meals, drinks, antiques, and other goods and services to cost you from 25 to 40 percent less than what they would in many U.S. cities.

This charming, gay-friendly city of steep hills, stone houses, and cobbled lanes preserves its French heritage better than even Paris. There are enough fine accommodations in Quebec to make choosing a place to stay something of a challenge—many of the best are enthusiastically gay-friendly. Best bets include the uber-romantic Auberge St-Antoine, which sits next to the esteemed Musee de la Civilisation in Lower Town; and the luxurious Hotel Dominion 1912, a chic and gracious boutique hotel renowned for its stylish guest rooms and personable staff.

Flying to Quebec City is a bit pricey from U.S. cities, but the low prices you encounter once you arrive may help offset this. Another useful strategy, if you’re also going to be visiting the dynamic metropolis of Montreal, is to fly there and either rent a car or take VIA Rail Canada—the scenic three-hour trip costs only about US$50 each way.