For Ash Hammond, coming to the United States from Zimbabwe was more than a chance to get an education—it allowed her to be herself at last, and come out of the closet. For Rikke Mananzala, coming out meant a complete change in his life.

Mananzala says, “When my parents found out I was queer, I was asked to leave our house. From age 16 on, I was figuring out things on my own—like how to go to high school, and still have food, a place to stay, and to go to college. I had to endure a lot of unsafe situations, and a lot of things I didn’t expect or think I deserved as a young person.” 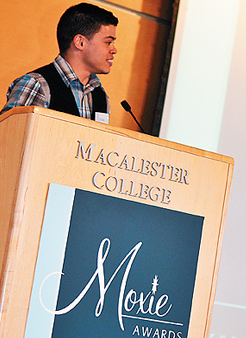 Both Hammond and Mananzala found themselves in New York City, where they ended up at (FIERCE), an organization geared to GLBT youth of color ages 13 to 24.

The two were in the Twin Cities in April to speak at a community event at Pillsbury House, as well as at PFund’s annual Moxie Awards, where the local group awarded scholarships to local youth and grants to a number of organizations.

What activists have found is that while services exist for GLBT youth, they have less of an emphasis on creating a political voice—vital if the victories gained in the courts or legislatures are to continue beyond the initial passage.

Mananzala notes, “There are places for youth to go to have basic needs met, like health care and housing, but there wasn’t any kind of political organization.”

A decade ago, a group of young activists in New York organized FIERCE to create a stronger political voice for that part of the community.

Mananzala recalls of his association with FIERCE, “I felt isolated. But here, I met a lot of people, and that is where my consciousness was opened up. There were things that we could do, and things we could change. It’s kind of like a union. We fight for the rights that we collectively want.”

That commitment and radical spirit drew Hammond to FIERCE, which she learned about at a conference, followed by a pair of development internships.

Hammond states, “There are not enough services for people like me.”

FIERCE provides outreach at the street level and with gay-straight alliances throughout New York City.

Hammond explains, “We’re trying to get people involved with different issues, from homelessness to police brutality. We try to get the young people organized, and make them aware of systems of oppression, the history of social-justice movements, and what they went through, so we can use them now.”

Beyond that is an effort to take FIERCE’s operations to a nationwide level. In surveys of dozens of communities around the country, the organization found that the top three concerns were transphobia and gender-based violence; homelessness; and mental-health and wellness programs.

Mananzala remarks, “Across the country, they are getting services, but not power. It’s scary if we are becoming depoliticalized.”

The organizational force is there. Youth organizations have been instrumental in gaining support for same-sex marriage across the country. It’s a matter of keeping the eye on the key issues for GLBT youth.

While FIERCE is organizing chapters in other communities, it plans to work with already-existing services in the Twin Cities, according to Mananzala.

As Mananzala puts it, “If winning was easy, everyone would do it. We have to get other people into the fight, and to change the system. The moments that are most profound to me are when I see a member who has come in, and thinks that change is impossible. Then, they see a victory that they made possible. They know that change is possible, and then bring other people into the fight. I’m in this for the long haul.”