Movie and stage versions of Fame give us a vivid sense of what it can be like for a performing arts high school student, the training process it takes to become a professional performer, and being an outsider.

Tony Mansker is directing and choreographing the brisk stage version of Fame at Mystic Lake Casino. An original cast member in the Broadway production of Matthew Bourne’s Mary Poppins, he was understudy for the men’s lead of Burt, filling in 50 times. He has garnered accolades for staging hit productions of Fame and Footloose at the Tropicana in Atlantic City. As a performer, he has toured extensively in West Side Story.

I spoke with Mansker about the content of Fame, and his thoughts on choreography. 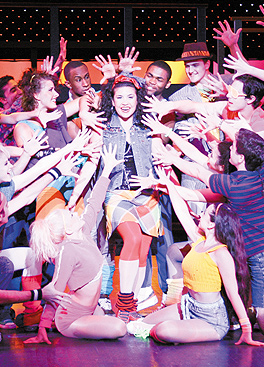 Tell me about the gay aspect in Fame.

The musical, like the movie, deals with the ambiguous sexuality of Nick Piazza [Peter Criss]. In the hour-and-a-half version you’ll be seeing at Mystic Lake, it’s never decided in the script whether he is gay or not. It is suspected. His best friend in the show, who is a girl, Serena, has a crush on him, and she sort of gets upset that he has no response to the fact that she likes him. And then, it comes out that most everyone thinks he’s gay. So, it’s actually quite an enjoyable scene when that happens. It reminds me of the scene from the movie In and Out, with Kevin Kline and Joan Cusack, where she gets upset that he didn’t tell her.

How have you approached Fame’s choreography?

The producers have asked that we take kind of hip-hop flair to the choreography. I’ve taken that, and combined it with some of the more famous of the ’80s dances like The Cabbage Patch and The Roger Rabbit. From that point, I’m looking to make an interesting, hot show.

You were choreographed and directed by Matthew Bourne in Mary Poppins. Having performed at length in runs of West Side Story, you’ve also been deeply attuned to the choreography of Jerome Robbins. Both were gay men, of course.

Matthew Bourne has great vision. I loved working on Mary Poppins. He choreographs and directs.

The ghost of Jerome Robbins—and I mean that only favorably—permeates so much of what we still see on the musical stage. Why do you think that is?

Part of it, I think, is the way he worked: so organically. Take West Side Story. Leonard Bernstein’s music and his choreography were created at the same time, and woven together so intimately that to think about West Side Story without that choreography is almost silly, because they were created at the same time, for each other, with each other. The ballet and jazzy influences he brought into his choreography; the shapes and pictures he created; the way he told the story with dance—are second to none. He’s the top, and that’s why his name and legacy still live on.

Both West Side Story and Fame grapple with youth in turmoil and race.

In Fame, Tyrone [Ariel Deliz], a black character, is illiterate. It’s one of the major themes of the show. He tries to pretend that reading is unimportant to him, because he feels that he’s just going to dance his way through life, that he’s going to make his living through dance, and there’s no reason or need to be able to read. Obviously, we know that’s not the smartest idea. Tyrone brings an edge to the show. We see a lot of the story through his eyes. That’s a way the audience can connect to the struggles of being a young performer. He comes into the school as a hip-hop dancer, and at the Fame school, you learn everything. So, we see him struggling to learn ballet and other styles that are not his own.