Michael Bennett (1943-1987), director of the acclaimed Broadway musical A Chorus Line, taped personal stories of dancers, and workshopped them into a singular sensation that contains queer content especially bold for the time. In sharing his own gay perspective, he got the dancers, who were of various sexual orientations, to open up. Dancer Nicholas Dante’s story shaped the gay character of Paul. 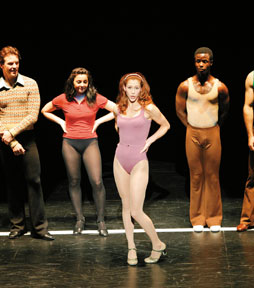 Adam Del Deo and James D. Stern, in connection with Bennett’s estate, codirected Every Little Step, a soaring new documentary that employs the never-before released tapes; illuminates the development of the musical’s 1975 incarnation, which won nine Tonys; and records the 2005 audition process for its latest Broadway revival, which runs at the Orpheum in June.

Del Deo reflects, “The idea of asking his fellow gypsies to sit in a room all night long drinking wine, allowing their lives to be examined, was really an avant-garde concept at the time. He pulled from those tapes a lot of the narrative and character sketches for what became the play. That type of confessional approach was something new.”

Hence, A Chorus Line presaged the 1980s performance art movement, which boosted queer visibility, with performers steering their own careers, rather than churning as a cog on the corporate show biz wheel.

Del Deo adds, “To work your material, try things out, finesse it, get the show into a place the director and the company feels it’s in the strongest position to work creatively and in the marketplace—that’s something A Chorus Line can be called out for doing.”