Esera Tuaolo has loved to sing his entire life. It was true as a youth growing up in Hawaii, where his father taught him his first songs when he was just 4 years old. It was true during his nine years as a lineman in the National Football League, where he was invited to sing the National Anthem before numerous games, and where he participated on two albums that paired players with professional musicians.

And it has been true in the years since Tuaolo came out as a member of the GLBT community, and worked on issues such as homophobia in sports.

The fruits of that lifelong love of music have come together in a self-titled CD that Tuaolo crafted in a Minnesota studio. The 10-song collection, currently available on iTunes, will see a physical release in late March or early April.

The album marks the fruition of a business relationship between Tuaolo and David Kellogg, a songwriter and producer. Together, the two formed Tavai Inc. 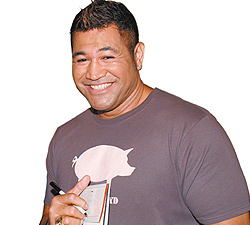 On Tuaolo’s CD, the mixture of covers and originals touches on various aspects of his life, from his spiritual side (“Oh God”) to a tune about football (“Whose House is This?”) to the battles he has fought through the years (“Alone in the Trenches”).

“It’s a very eclectic collection. It has pop. It has adult contemporary and a bit of hip-hop. But I like a lot of different kinds of music,” Tuaolo says.
Though always interested in music and the arts, Tuaolo also has loved sports. Gifted with the size (he’s 6-foot-4 and 300 pounds) and desire, he dedicated himself to football. That turned into a nine-year professional career with five NFL teams, including the Green Bay Packers and the Minnesota Vikings.

Tuaolo kept his sexuality private during his career, not coming out until 2003. After that bombshell dropped—destroying numerous assumptions about athletes along the way—he continued to do speaking engagements at schools and corporations. He especially enjoys the chance to talk to athletes.

“Things are changing,” Tuaolo relates. “It’s still baby steps, but it is happening. When I go to schools, they have gay-straight alliances. In the NFL, when someone makes homophobic remarks, they are dealt with right away, instead of being swept under the rug.”

All this left Tuaolo with his musical itch still to scratch. The debut CD satisfies it.

Though he describes himself as a “hollerer,” Tuaolo is gifted with a fine, angelic voice. He puts it to good use throughout the collection, such as a cover of John Lennon’s “Imagine,” which recasts the tune with a funky beat, but never loses the emotional heart of the original.

Over a period of nine months, Tuaolo worked with Kellogg to put the recording together, including writing his own material. Along with “Whose House is This?” it includes “Baby, I’m Sorry,” a fairly self-explanatory song, and “Butterfly,” which he wrote for his twin children.

Tuaolo credits Kellogg for helping to shape his own songwriting: “We spent a lot of time discussing the songs back and forth.”

The disc itself is a test case for Tavai, which hopes to produce more music by new and upcoming artists.

“There are a lot of great singers out there who don’t have a record deal. I’d love to help people out with their music careers,” Tuaolo shares.

Though parts of the music industry—especially hip-hop—are notoriously homophobic, Tuaolo is ready to use the same steady perseverance as in the sports world.