The Program in Human Sexuality (PHS) at the University of Minnesota Medical School has embarked on a nationwide project to study factors responsible for a high prevalence of HIV among transgender individuals.

Walter O. Bockting, Principal Investigator for All Gender Health Online (AGHO) and Coordinator of Transgender Health Services at PHS, along with Alex Iantaffi, Research Fellow and Project Coordinator, recently discussed this important study, as well as the work of PHS in general. 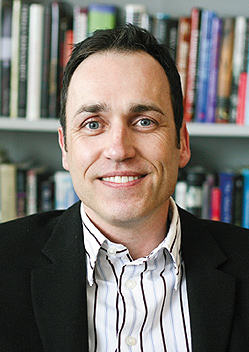 The origins of the current AGHO study can be traced back some years.

In 1971, the University Medical School established PHS to teach and conduct research in the area of human sexuality. Transgender issues began to be addressed at that time, when a medical school curriculum was established that included a seminar on sexual attitude reassessment incorporating lectures and readings. In 1973, PHS began offering therapeutic and educational services to individuals with sexual dysfunctions and other relationship problems. In 1977, it became a unit within the Department of Family Medicine and Community Health.

PHS started to expand its research programs in 1988—about the time Bockting arrived at the University. It began focusing on transgender HIV in 1991.

Bockting recalled, “In the early 1990s, we began to see more transgender people with HIV. There were suddenly a dozen transgender clients who were HIV-positive, and there was really nothing for them. So, that’s when we developed an HIV-prevention program geared to the transgender community, and started to bring separate segments of the local community together. At that time, there were transsexuals, crossdressers, drag queens, and they all had their separate groups.”

The first online study, which reached out nationally through the Internet, was completed in 2005. The current one is based on these findings, according to Bockting. The 2005 survey was carried out with more than 1,200 trans people throughout the United States in a distribution that mirrored the United States Census. About half the sample were trans women, and half trans men.

Another unexpected result was that significant numbers of nontransgender men choose FtMs as well as MtFs [male-to-female persons] as sexual partners, something taken into consideration in the new study.

Bockting explained, “The second study has several aims. One phase is aimed at men who have sex with trans men or women. The other phase is focused on developing and evaluating an online intervention for trans people who have sex with nontrans men.”

While the data is not all in, nor has PHS had time to evaluate the implications, it seems that some of these nontrans men who have sex with trans people specifically seek trans people out, while some do not—i.e., they just had met someone they liked who happened to be transgender. Virtually nothing is known from a scientific point of view about the identities and sexualities of these men.

What is clear is that some of these men have a specific desire for transwomen or transmen—i.e., they enjoy the unique experience trans people bring to their relationship or sexual encounters.

Bockting pointed out, “There seem to be distinctions between those who have sex with trans women and those who have sex with trans men. However, it is too early for any conclusive findings to be determined. We hope to learn more about this particular issue through our current study. In addition, we are developing an online version of our popular offline All Gender Health seminars, an intervention that aims to promote HIV reduction in the context of overall transgender health.”

Iantaffi observed that PHS is moving toward intervening with the environment “whether it’s the family or the community, as well as doing the research on which we can base public policy.”

As more is known and understood about transgender individuals, Iantaffi added, “Families are generally becoming more supportive of gender-variant children. There’s a generational change, children are more aware of themselves, and more and more families are also becoming aware, and that helps them become more supportive. The young people themselves might still have a lot of anxieties, but as trans people become increasingly visible, families are moving away from shame.”

The very word “transgender” resists categorization and definition, but Bockting offered a few insights, and found some benefits in complexity.

“Certainly, there is some level of consistency and continuity implied in identity, yet it is not static. It continues to evolve and take on changing meanings over the course of a person’s life, or across various social contexts. Transgender people have a unique opportunity to liberate or free themselves from the constraints and reductionary categories of male versus female, man versus woman, masculine versus feminine. Their experience often transcends these binary, limiting understandings of human diversity.

“So, the plus side of the complexity is that transgender people have a space to describe and actualize their own particular identity, their own way of being transgender, and something that can continue to evolve over time.”