We all know February 14 is Valentine’s Day, but as well it is celebrated as V Day. Actually, “celebrate” may not be exactly the right word, because V Day is about recognizing violence against women and girls worldwide, and taking action against that. It was begun in the late 1990s by playwright Eve Ensler (The Vagina Monologues). 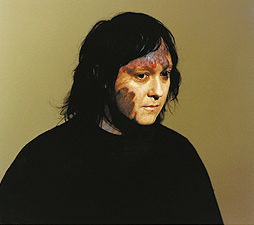 This year in Minneapolis, a pronounced transgender integration into V Day activities well may signify a renewed interest in a renewed feminism. Two events—New York’s Antony and the Johnsons in concert; and The Naked I: Monologues from Beyond the Binary, which has been referred to playfully as a sort of transgender Vagina Monologues—surely will challenge concepts of just what it is to be a woman, and make for great entertainment.

One of Antony and the Johnsons’s most beloved transgender tunes is “For Today I am a Boy,” which likely will be heard at their local concert. They are, after all, a group congealed by the melting down of gender boundaries. Early on, Dr. Julia Yasuda, an intersexed person, used Morse Code to welcome their concert crowds.

Lead singer and soul force Antony Hegarty sings the vocals with what has been called the transcendental emotion of the blues. As odd as it may sound, these vocals also blend with a simplicity reminiscent of medieval music. The accompanying Johnsons play instruments such as cello, drums, bass, horns, violin, and guitar.

Hegarty has shared in writing in stream-of-consciousness form some of what’s on his mind, which clearly has a V Day resonance: “circles of light, the Arctic, witches, mammals, Samoa, the slavery of addiction and viral late-stage capitalism, woman power, families treasuring their transgender children, the United Nations International Panel on Climate Change, feral intuition and a global two-spirit alliance, forest, oxygen, carbon, patriarchal religions, and hierarchies that would rather catalyze apocalypse than admit that centuries of male domination have almost destroyed us, a feminist revolution might save our world.”

At Bedlam Theatre, 20% Theatre Twin Cities, true to its own defiant sense of gender inquiry, will perform the regional premiere of The Naked I: Monologues from Beyond the Binary, by Tobias K. Davis, who wrote the breakthrough FTM transgender play Standards of Care.

For those of you new to transgender terminology, the term “binary” is central. It refers to either/or, male/female, north/south, left/right, etc. Consider that opposites are relative, and that lots of ambiguity in between can be messy and scary, or resplendent and empowering.

One of Naked’s directors, Max Gries, shares, “I am especially impressed that the stories in the show are not just about bodies, sex, and sexuality. They’re also about relationships, family, and gender identity and expression in a dazzling spectrum, with common human themes to which everyone will relate.”

Davis’s script focuses on bodies and experiences of transgender, gender-queer, and intersex individuals. You will hear stories about men with vaginas, women with penises, and women born without vaginas, among other differences.

20% Artistic Director Claire Avitable, on the heels of her directorial success with Judith Thompson’s A Perfect Pie at Minneapolis Theater Garage, is turning this performance into a broad-based community event with approximately 40 different artists.