Bill Bertrand knows all too well the acerbic sting of stigma. He has heard the sniggering at cocktail parties, noticed the long stares inside restaurants, and perceived the downcast eyes in parks—all because of who he is. You see, he’s the manager of a car dealership. 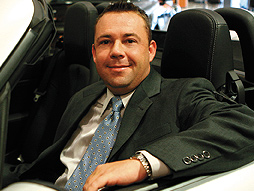 “The stigma used to be that the car business was like the Mafia, but the business is in a real state of evolution,” Bertrand says. “The Internet has changed it a lot. People are better educated. People have a better understanding of what really occurs at a dealership.”

The dealership Bertrand calls his current professional home is Morrie’s Mazda in Minnetonka. This particular Morrie’s—one of more than a dozen in the Twin Cities area—is the largest-volume Mazda dealership in the state.

According to <www.morries.com>, Morrie’s Mazda “is rated one of the Top Customer Satisfaction Dealers in the nation.”

Bertrand is no small factor in this success. Part of his management revolves around changing popular perceptions.

“People thought there were a lot of behind-the-scenes things that happened at car dealerships—a lot of shady things that happened,” Bertrand recalls. “I don’t know if working at a car dealership, particularly in sales, was a highly regarded position. The push with the dealers has been to educate people, and become more personal and professional. And I think the public’s gone along with it.”

For Bertrand, that reeducation of the public has taken place on the personal as well as the professional front.

“I’ve been out forever now,” Bertrand recounts with a self-effacing laugh. “It’s been so long, I don’t remember why I came out. I came to the Twin Cities in 1999, and I came to the Morrie’s group in 2001. The culture in this group was phenomenal. They have a lot of family working here. Typically, in the car business, it would be tough to be the general manager of a car dealership and be out, but the culture here is so great that it isn’t a problem.”

This culture at Morrie’s mirrors a larger trend.

“The industry has evolved immensely,” Bertrand relates. “It’s just now starting to welcome female employees into its doors. I think the old stigma of the auto industry is that it’s so male-driven, and everyone has the wife and kids at home. I think a lot of it has changed. I think a lot of that change has to do with the group or the company you work for—how progressive the people are.”

That larger trend has endured, or enjoyed, no small amount of nudging from Bertrand simply by his being himself.

“I will go to a national dealer meeting with several other Mazda dealers in the room, and we’ll have roundtable discussions,” Bertrand shares. “Afterwards, we’ll go out for dinner or something, and I’ll bring my significant other. And I’ll be the only one bringing a ‘significant other,’ so to speak. But it’s cool, because they respect me professionally, and they respect me personally.”

Of course, it was good-old-fashioned, nose-to-the-grindstone hard work that got Bertrand to being a general manager, but now that he’s there, his gender identity has a real effect on his outlook and leadership style.

As Bertrand remarks, “I think you have a better understanding of people and a better tolerance. That’s one of the important things in a car dealership, and my gender identity helps me find a more diverse crowd to work at my dealership. We have all sides of the spectrum of people working here.”

That diversity can translate to dollars and cents for the dealership, as, in Bertrand’s words, it “is attractive and comfortable to the customer that comes in. I think when they come in, they’re surprised by the diversity of the staff. It’s not every day that the person selling you your car is gay or female, or any of those things. If the customer can find someone they’re comfortable with, someone they relate to, it changes their experience. I’d say that is probably one of the largest things that this particular dealership has going for it.”