I admit it: I’m a country music virgin, keeping the music-appreciation legs of my judgment primly crossed, protecting the purity of my love for “finer” vocalizing, from Puccini to Cole Porter. Hated those nasal C&W singers, with their big hair, bad teeth, and worse grammar. No affinity for their poo-rol’-me dirges over masochistic relationships that even the Taliban would decry as grounds to leave. So, it’s clear you couldn’t find my radio dial turned to the Grand Old Opry, much less shell out good money for a concert. 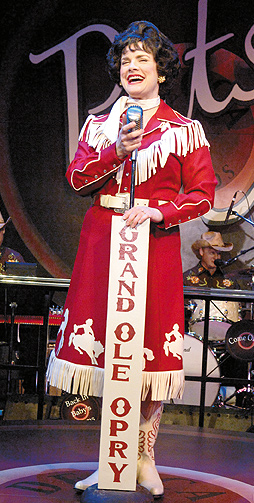 Until now. Didn’t take long for me to shed my scruples, and put my hands together (as they’re all too wont to say) for Patsy Cline. Or, to be accurate, for the vivid, mesmerizing Always…Patsy Cline singing valentine of a show that originated in Texas in 1988, thrilled Off-Broadway in 1999, and is having its regional premiere at Chanhassen Dinner Theatres. My only question: What took you guys so long? And me?

The Cline it portrays was the Susan Boyle of her time, discovered in a talent contest on the Arthur Godfrey TV show. She made her name singing in honky-tonk bars, suited up in short, sequined dresses, and even tighter pants that defied the decency code of the ’50s. Likewise, her rich and deep voice, easy vocal acrobatics, and emotionally layered numbers defied the mold of female C&W performers—sassy, exuberant, tender, too, clearly propelled by her unspoken mandate: Live every minute.

As personified on the Chan stage by Monica Heuser in a blinding sequence of sequins and gold lame, Cline’s charisma is revealed—and celebrated—in a repertoire of 27 hit songs she’d recorded. Heuser’s strong, confident voice probes the true color of any mood, from the dreamily romanticism of “Walkin’ in the Moonlight” and “Sweet Dreams” to the angry wound of “Your Cheatin’ Heart,” the soft and sad retreat of “Three Cigarettes in the Ashtray,” and the hopeless resignation of “She’s Got You.” Then, she turns on a dime to the upbeat gospel ring of “How Great Thou Art,” and the spunky free-for-all finale, the torchy “Bill Bailey.”

While Heuser appears a little older and rounder than the singer was when her life was cut short at 30, she otherwise fits Cline like a second skin, trading repartee with the onstage band. Heuser as Cline connects with (true story) a Houston fan named Louise, played with feisty spirit and gentle love for her idol-become-confidante by Chan regular Peggy O’Connell (once the lead here in Annie Get Your Gun, and still replete with vigor, spark, and the big hair that’s the union card of the genre).

That’s it: no fancy set, no tricks of lighting, not much movement around the stage—and it’s a good thing. Wisely, director Michael Brindisi lets the songs, and the legend behind them, carry the evening. Two women, two warm personalities, one bizarre friendship, and one terrific voice: worth the price of admission.