On December 19, DJ Chi Chi La Rue will appear at the Gay 90’s Dance Annex for her annual Holiday Jingle Ball. She has been hosting a popular local holiday event yearly since 1997. 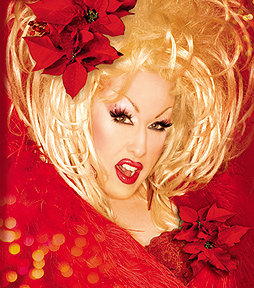 A native of Hibbing, Minnesota, LaRue launched her career as a female impersonator in the Twin Cities in the early 1980s, before moving to Los Angeles in 1986. She celebrates two decades of being the most famous gay adult video director. Her third incarnation is as a much-in-demand DJ. In 2007, Out Magazine named LaRue one of its Top 50 Most Powerful Gay Men and Women in America.

Nina DiAngelo, Show Director of La Femme Show Lounge at the Gay 90’s, says, “We are tremendously excited once again to welcome Chi Chi LaRue back to the Gay 90’s, which was one of the first venues she performed at when she got her start in drag more than a quarter-century ago. She drew huge crowds when she appeared here last December and in June for Pride Saturday. Don’t miss her fabulous annual Twin Cities holiday extravaganza!”