Dixie’s Tupperware Party, which has been taking the nation by storm, was nominated for the coveted Drama Desk Award for Outstanding Solo Performance. How many drag turns can lay claim to that? When you catch Dixie Longate (get the clever phallic play on words?) at Hennepin Stages, you can purchase some of her plastic wares from her Tupper Fairies. Though Kris Andersson is the man beneath the wig, he channels Dixie when interviewed. This one-woman tour-de-force who played Off-Broadway not only is on a hit North American tour, but also has broken records for tupperware sales.

Communicating with the hard-drinking trailer-park diva from Alabama recently, I was taken aback but delighted by her brazenly bawdy view of life. But then, after 18 marriages, what do you expect? 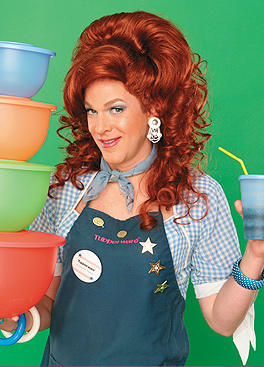 Everyone’s Mama went to her share of Tupperware parties where ladies would be locked in a room, and told about how great plastic bowls were, but it was more like a lecture with tea and finger. People had to sit there, all bored out of their mind. Hell, it is a party! I want to make sure that people are up and playing and happy and drinking and burping. It is all part of the experience. I want to show what really goes on when a bunch of ladies lock themselves into a room with creative food storage solutions scattered around the room. There is a reason that Tupperware has been around for more than 65 years. It always makes me happy where it counts: the wallet.
You’ve said that sex is the best form of cardio. And you seem to have an exciting sex life. What kind of advice would you give for those of us who want to heighten our sex lives?

Well, go out and meet lots of people. You can’t have sex unless you have people to have sex with, so I think that is important. There are lots of places people go to that you don’t have to be afraid that bad things will happen—like libraries and the PTA. But, of course, they won’t be able to do things with a goat and a midget and a minitrampoline and some peanut butter and an electric mixer like I can do. You need to take some chances, and meet some good quality stock, to take you out, and pleasure you like a goddess. Check Craigslist.

I hear that you think that panties are optional for the “perfect wardrobe.”

Listen, as long as you are comfortable, that is the most important thing. You know, when it is in the dead of summer, and you are at the church picnic, and you don’t have one of them big old hats to shield you from the sun, and you are just sitting there all sticky, and the hymnal is too big to use as a fan. Well, the less you wear, the better you feel, right? And the pastor wants you to be comfy, so that you put more in the collection plate, so everybody wins!

Tell me about some of your more interesting plastic products.

Well, we have tons of great stuff. We have stuff for every room in the house. We have things to put your tequila in when you are drinking at the table. We have stuff to put your deviled eggs in for the church social. We got some storage containers that I use to put my misses-lady-things in when I go on the road doing my Tupperware parties. I mean, there is really no end to the millions of creative uses for this great crap in the house and in your daily life, no matter what sort of job you’ve got.

You don’t fit the stereotype of the typical Southern lady. Did something go wrong in your upbringing? Don’t you find that your approach to life at odds with Southern conservative values?

Oh, hell, sugar, I am still a conservative. I’m from the Bible Belt. But that don’t mean I don’t like to ride the pony every so often. I didn’t go to finishing school and all that nonsense. I was raised by my Mama, who had to make ends meet on her own while she was raising us, so I learned how to make a $5 bill stretch out for about two weeks. I’m not always proud of it, but it’s the truth. If that ain’t the definition of being conservative, I don’t know what is.

Do you ever get judged by others for abandoning your children?

Well, I didn’t technically abandon them. I just go to work for really long periods of time. I mean, when I went to prison the first few times, it was the law that was sort of forcing me to abandon them, so I blame them for anything that happens to my kids. Now, my best friend, Georgia Jean, just comes over, and takes care of them while I am gone. And by “come over,” I mean when she feels like it, and remembers which trailer we live in. And by “takes care of,” well, you will have to look at the pictures to get a clearer sense of that. But right now, they are in “evidence,” so I can’t show them to you.

And why are you on parole?

Every so often, things happen where you get caught for things that you really weren’t a part of. Now, I was never taken in for anything big, just little offenses here and there. You know, when you are strapped for cash after a night of binge drinking, and then, you find yourself needing to bring in cupcakes for your daughter’s career day at school. Well, things happen to facilitate that, ’cause I don’t want to let my daughter down. And with all them high-tech cameras all over the place, I guess it is just a matter of time till someone from the law comes over, and puts me in some handcuffs. And I don’t mean those nice fur-lined ones that you get on your birthday or at holidays. I mean the kind that don’t have the key attached to them when you first get ’em.