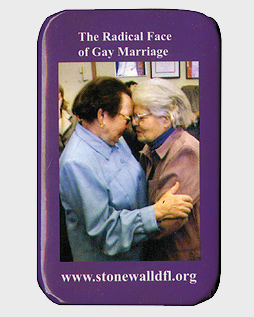 Only death could have separated quintessential lesbian and feminist San Francisco activists Del Martin and Phyllis Lyon, as it did on August 27, when Martin passed away at the age of 87. The two had been life partners since 1952.

In 1955, Martin and Lyon founded the Daughters of Bilitis, the nation’s first lesbian organization. They both acted as President of the group, as well as Editor of its publication, The Ladder, until 1963. Both served on the White House Conference on Aging in 1995.

On June 16, Martin and Lyon were married in the first same-sex wedding in San Francisco following the California Supreme Court decision legalizing same-sex marriage in the state. It capped more than a half-century of activism for the couple.