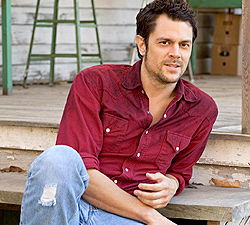 Energizer-Diva Cher has had on-screen romances with a variety of Hollywood players, from Nicolas Cage to Dennis Quaid to Jack Nicholson to Diana Scarwid. (Remember her playing lesbian in Silkwood? Sure you do.) Now she’s hooking up with John Waters’ favorite MTV personality, Johnny Knoxville, in the upcoming comedy The Drop-Out. The Jackass alum stars as a slacker and perpetual college student whose parents finally lose patience and throw him out of the house; Knoxville’s character winds up moving in with the cougar next door (Cher), whose own adult son is in desperate need of a role model. Both Cher and Knoxville have big gay followings (OK, yes, Cher’s is bigger than big) and enough tattoos between them to cover about one and a half people. Maybe they’ll actually have onscreen chemistry too. We’ll see when The Drop-Out reaches screens in 2010.

Moreton Wants You To Say Hello to Stan Talmadge
Director David Moreton is one gay director who won’t be pigeonholed; he made his screen debut with the moving coming-of-age tale Edge of Seventeen and then followed it up with the dark and violent Testosterone. But his upcoming comedy Say Hello to Stan Talmadge speeds off in a completely different direction—Gary Cole (Office Space) stars in the title role as a deadbeat dad who tries to mend his family ties by dragging his wife and kids cross-country in a mobile home (circa 1979) to compete in a game show. The supporting cast includes Jennifer Coolidge, Agnes Bruckner (Blue Car) and Tina Holmes (Six Feet Under), so it sounds like a winner. And if not a winner then maybe a not-bad Little Miss Sunshine remake. Stan Talmadge doesn’t have a release date, but should hit the festival circuit pretty soon. Stay tuned for buzz.

Hot Girls in Scary Places. Seriously
It sounds like a lesbian exploitation flick, but it’s actually a new reality series: Hot Girls in Scary Places. As you might guess from the on-the-nose title, this new show will send attractive young ladies into locations that have supposedly experienced some kind of paranormal disturbance. (Think The Ghost in the Invisible Bikini. Or not.) The pilot for the show (airing March 13 on E!) will feature three USC cheerleaders spending the night in an abandoned—and allegedly haunted—hospital to compete for a $10,000 cash prize. Given the series’ all-sexy-chicks-all-the-time premise, it sounds like we have a new lesbian guilty pleasure coming to cable, just in time for the finale of The L Word. If the March broadcast draws big numbers, look for Hot Girls in Scary Places to become a permanent part of the E! schedule.

Guarino and Vardalos Hate Valentine’s Day
If you saw Confessions of a Shopaholic and were wondering why the receptionist looked so familiar, it’s because actor Stephen Guarino is one of the funny boys on Logo’s Big Gay Sketch Show. And the up-and-comer’s landed a role in I Hate Valentine’s Day, the latest from My Big Fat Greek Wedding and Connie & Carla star Nia Vardalos, who makes her directorial debut. Vardalos plays a florist who wants to date a restauranteur (John Corbett, another Big Fat alum) without it turning into a serious relationship. In addition to Guarino, the movie features the very funny Judah Friedlander (30 Rock) as well as Dan Finnerty of culty guy-singing-girly-songs group The Dan Band. February may be over, but you may get to Hate Valentine’s Day before the year is up.
Romeo San Vicente actually likes Valentine’s Day, especially when he’s presented with a big package. Of candy. He can be reached care of this publication or at [email protected]