Let’s say you (guiltily) watched Queer As Folk and secretly wished she would be your personal P-FLAG mom, one who always told the bawdiest jokes right alongside your gay BFFs. Or, like guest star Rosie O’Donnell, you wanted Sharon herself in the more “Let’s Get Physical” way. Well now, the gay rights advocate and QAF alumna will play an openly-lesbian woman in a time when that sort of thing just wasn’t done out loud, in the indie feature Hannah Free, which finds two mid-20th-century women, once-intimate friends who’d gone their separate ways, falling in love all over again against the backdrop of history. In production now, audiences will be free to see Hannah sometime in 2009. 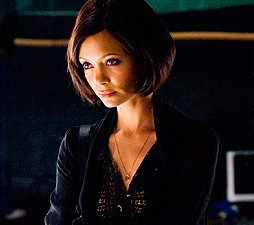 Some gay guys obsess over art or music or fashion. Director Roland Emmerich seems to enjoy freaking out over the end of the world. After directing little movies like Independence Day and The Day After Tomorrow, he’s taking on another cataclysmic disaster movie titled 2012. What’s it about? Well, all the man in charge will say is that it’s some sort of natural disaster and that the ancient Mayan calendar predicts the end of Earth life in about four years. Spooked yet? So is his cast: John Cusack, Thandie Newton, Amanda Peet, Woody Harrelson, Danny Glover, Chietel Ejiofor, and Oliver Platt, among many others. No word yet on whether or not the title actually means the number of actors involved, but the film is already hotly buzzed about and due sometime in 2009. That might give everyone the time to find a blueprint for escape, should the entire planet actually blow up then, after all.

Finding Me To Find Its Way to Theaters

Noah’s Arc: Jumping the Broom’s box office receipts, while small by Hollywood standards, represents something of a milestone in queer cinema featuring African-American casts. Its per-screen average in limited release proved that gay films by and for people of color are not an impossible dream beyond the film festival circuit. Which makes the arrival of Finding Me a cause for hope. Picked up for theatrical distribution by TLA Releasing, the gay, black rom-com, the debut of director Roger S. Omeus, Jr., tells the story of a young man trying to balance his new love interest with a complicated relationship with his own homophobic father. Not hurting the film’s profile are racy, skin-baring ads, featuring the hot young cast that should draw more than a few eager ticket buyers when the film opens in spring of 2009.

Hot on the heels of the mainstream-flavored biopic Milk, Gus Van Sant seems eager to get back to his favorite kind of filmmaking—the sort that takes a walk on life’s wilder side—with a film version of Tom Wolfe’s 1967 book, The Electric Kool-Aid Acid Test. And few groups of American artists were wilder than the Beats, one of whom—Ken Kesey—undertook a now-famous cross-country road trip with his group of “Merry Pranksters.” Along the way LSD was taken in serious amounts, and mind-expansion ensued, eventually resulting in the writing of One Flew Over The Cuckoo’s Nest. Milk screenwriter Dustin Lance Black is reportedly handling script duties, but no casting announcements have been made. But what actor in his right mind would “just say no” to something that sounds this much fun?

Romeo San Vicente’s favorite flavor of Kool-Aid is purple. He can be reached care of this publication or at [email protected]