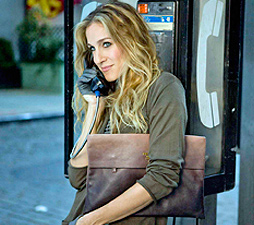 Relax, gays—Sarah Jessica Parker knows you’re all slavering for a follow-up to this summer’s hit Sex and the City movie. But she’s got to stay busy while the Sex sequel goes through development, so in the meantime, Parker will be teaming up with the ever-charming Hugh Grant for a new romantic comedy. The untitled film will star the toothy twosome as an estranged, high-powered New York couple who are put into the Witness Protection Program after they observe a murder being committed. Stuck together in a small town in Wyoming—where Parker’s character will trade couture for flannel—they rekindle their love while dodging the murderers. No release date yet on the movie, which will reunite Grant with Two Weeks Notice and Music and Lyrics writer-director Marc Lawrence. Until Sarah Jessie P. reunites with Big, this will do just fine.
Moore, Firth Cast in Tom Ford’s Single Man
Romeo has told you about how fabulous designer Tom Ford is making his entree into filmmaking with a screen adaptation of legendary gay author Christopher Isherwood’s novel A Single Man. Now the project has begun to line up an exciting cast. Colin Firth will star as a gay British professor in Southern California, whose partner has just died suddenly. Matthew Goode—seen recently as the bisexual Charles Ryder in Brideshead Revisited and soon to co-star in Watchmen—plays the young, recently departed lover, and Julianne Moore will appear as one of the professor’s friends. The film takes place over a single day, with the professor trying not to let his loss interfere with his daily routine. A Single Man should grace the screen by the end of 2009.
Bravo Sews Up More Fashion Reality
In its ongoing quest to be gayer than Logo, Here, and Clay Aiken put together, the Bravo cable network has announced three new fashion-based shows for its slate of programming. While Bravo may be losing the very popular (and extremely queer-centric) Project Runway, the channel has a similar competition for fashionistas, The Fashion Show, in the works, with November casting calls for contestants taking place in L.A., New York, Miami, and Chicago. Combining Runway with Dancing with the Stars might yield Celebrity Sew-Off, another new Bravo show that will have famous people designing and creating their own garments. (Romeo would like to see Lauren from The Hills try to fob off something from her own line.) And then there’s Fashionality, a new show featuring New York’s fiercest cultural icons discussing the week in fashion and pop culture. It’s TV you’ll have to dress up to watch.

John, Jagger, Bowie May Form Olympic “Supergroup”
One openly gay and two at least gay-adjacent kings of rock and roll are discussing plans to form a once-in-a-lifetime “supergroup” to perform at the 2012 Olympics. Elton John, David Bowie, and Mick Jagger—didn’t Bowie’s wife once claim she caught the latter two in bed together?—are exploring the possibility of performing together in London at the next summer games. Jagger, who’s already set to sing with the Rolling Stones for the Olympics’ opening ceremonies, wants to expand the show to include John and Bowie, as well as Phil Collins, Sting, Van Morrison, David Gilmour, and Jimmy Page. Even though the collective age of such a combo would hover around 500, the results would still have to sound better than Jagger and Bowie’s dreadful cover of “Dancin’ in the Streets” from 1985’s Live Aid.

Romeo San Vicente was once called “Jumping Jack Flash” after an incident in P.E. involving gym shorts and no underwear. He can be reached care of this publication or at [email protected]