It seems like Hollywood’s suddenly into imprisoning women. Of course, it has been doing that for years now, figuratively speaking, but now, the literal is taking center stage. First came news of gay filmmaker Alan Ball’s adaptation of the earnest UK prison soap Bad Girls. Then, Fox announced it would be launching a female version of Prison Break. 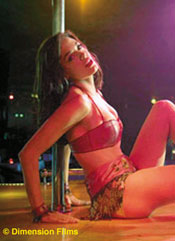 Now, Grindhouse codirector Robert Rodriguez will bring his ’70s exploitation vibe to the pilot Women in Chains!. That exclamation point speaks volumes about the level of wild lesbian mud wrestling planned for the series, set to revolve around Rose McGowan, Rodriguez’s fiancée and Planet Terror star. The director is shopping the show around to networks, and looking to bring his deranged Caged Heat-like vision to a TV near you. And, that mud wrestling will be shot tastefully, of course.

It took long enough, but a mainstream daytime drama, As the World Turns, finally has introduced a gay male storyline into its regular ongoing mix: the cute, young, college-boy romance of Luke and Noah (Van Hansis and Jake Silbermann). The addition not only has revitalized the show, but also has attracted an eager fan base that wants to see the queer love story blossom (so far, lots of kissing, but a lot more teasing about whether the two will wind up in bed). Enter guest star Cyndi Lauper, who’ll appear on a July 3 episode to sing, and promote her annual gay-rights-themed True Colors tour. But will Noah’s Iraqi green-card wife make trouble with Cyndi? Will his murderous dad kidnap them? Will Luke stop pouting about it all? Tune in to find out.

The nontransgender population of Trinidad, Colorado, probably never expected their town to become the sex-reassignment surgery hub of the United States, but in 1969, when Dr. Stanley Biber began performing the procedure there, the demographics of the 9,000-person town began to shift. Now, it’s home to a small but visible community of transgender people, patients who settled in the rural area for privacy and support. The documentary Trinidad, by directors PJ Raval and Jay Hodges, currently is making the film-festival rounds. It sets out to explore the tensions and the progress made as different groups of people learn how to coexist in the kind of town where everyone knows your name and your business. Expect a cable and DVD home for this fascinating film after its current brief theatrical debut tour.

Fahrenheit 451, the classic novel about oppression and book-burning from sci-fi writer Ray Bradbury, was made into a hit film in 1966 by Francois Truffaut, starring Julie Christie. Now, more than 40 years later, a remake is in the works. Gay producers Craig Zadan and Neil Meron (Hairspray) have been casting their nets to get a star attached to the dystopian drama about a firefighter whose job it is to burn books for a dissent-crushing government. Tom Hanks and Brad Pitt, at various points, have been connected to the film, but both since have reconsidered. For the project to get out of development limbo, a solid A-lister will have to say yes to the warrant the high-concept’s sure-to-be-equally-high budget. Until then, though, those books might have to figure out a way to set themselves on fire.

Romeo San Vicente has known men who were hot enough to burn up entire libraries. He can be reached care of this publication, or at [email protected].