David Stahl recalls, “It seemed almost too good to be true,” describing the “beautiful little town” of Decorah, Iowa, and the “extremely friendly and welcoming” reception he and his partner, Hans Venable, received when they went there to wed last June.

Stahl went on to explain, “Hans and I had had a wedding ceremony July 2, 1983. At that time, of course, there was no such thing as same-sex marriage in the United States, but Hans and I knew we would be together for the rest of our lives. We both came from families where healthy marriages were modeled for us by our parents, and we wanted the same thing. 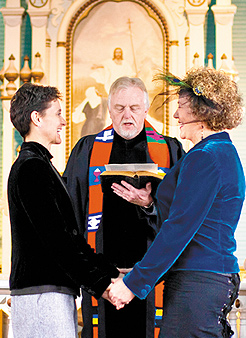 “Jump ahead 27 years. We heard of the historic decision by the State of Iowa to legalize same-sex marriage, and we felt a strong desire to get a marriage license there. Maybe it was the courage of a state from the heartland of America that helped us to choose. We live in Texas, where same-sex marriage is not recognized.”

Because the two already were planning a road trip with their niece, Joanna Satterfield, and her two children, as Stahl relates, “We included our marriage ceremony in Iowa as part of that vacation. We Googled the website welcomeindecorah.com, and liked what we saw, so we arranged with Amalia Vagts and the Winnishiek County Courthouse to have our wedding there. Amalia was so encouraging and enthusiastic about our plans, and the county courthouse so helpful in leading us through the process, we knew we had made the right choice.

“When we drove into Decorah, we were overwhelmed by the beauty and charm and friendliness of the town. We stayed in the Hotel Winnishiek, the historic old hotel on the main street, just around the block from the courthouse. The ceremony itself was performed in the courthouse, also historic and very beautiful, with Amalia, Joanna, and her children, Charlie and Scout, as witnesses. Having family participate in the ceremony was emotionally overwhelming. We are so grateful.”

Director Brenda K. Balk confirms, “‘You’re always welcome’ is the motto of the Winneshiek County Convention and Visitors Bureau. We want everyone to know that the Decorah area is a wonderful place for weddings for all couples. We have breathtaking parks and springs, and a historic courthouse that’s known to be one of the most beautiful in Iowa, plus amazing restaurants, and unique shops and art galleries.”

Same-sex marriage has been legal in Iowa since an Iowa Supreme Court decision on April 3, 2009.

Decorah, a town of about 8,200 only two-and-a-half hours from the Twin Cities, offers many opportunities for same-sex couples to realize their dreams.

In her words, “literally a staff of one,” Balk works closely with other businesses and organizations to assist couples in planning their nuptials.

Balk recommended Vagts’s website as “a great new service that specifically helps GLBT individuals have a wonderful wedding experience. You must check it out!”

Twin Citians Matt Puckett and Jerry Sands did just that.

Puckett recounts, “My husband and I were so thrilled to come across Amalia’s website! We knew we wanted to get married in Iowa, since it was so close to the Cities, but were at a loss as to what resources to use so we could find LGBT-friendly people to work with. We went down to Decorah to check things out, and instantly fell in love with the town and the people. Everyone we met was so nice and accommodating, and didn’t bat an eye at two men planning a wedding.

“We were also in contact with Amalia at that time, and decided to meet her on our second trip down, as we were having some challenges finding someone to officiate our ceremony. It was an instant connection. We knew right away that she knew what it meant for two people of the same sex to be getting married, and how important that was.”

Balk observes, “Decorah is a very diverse community, and although there are varying opinions, people seem to have respect for one another. All weddings have an economic impact on this community, so there are certainly businesses that do whatever they can to cater all brides- and grooms-to-be. That’s one of the great things about Amalia’s site—she has spent a considerable amount of time placing local businesses on this site who have specifically stated that they will welcome GLBT couples.”

Vagt’s records show that since that April 3, 2009, as she informs, “About 80 GLBT couples have traveled from outside Iowa to get married in Decorah, from Florida, California, Texas, and Alabama—over 17 states. The majority have come from the Twin Cities. I personally have interacted with a number of the couples, helping them connect with local vendors, or decide where to hold their wedding.”

Founder and President Vagts started Welcome in Decorah with her sister in April 2010, as, she states, “a wedding hospitality website for all couples. Our specific desire was to provide full hospitality to gay and lesbian couples thinking about marrying in Iowa. We started working with local vendors and a local design team to create a beautiful and welcoming site, and launched it December 1, 2010, with broad support from a number of key businesses in Decorah. The site is largely volunteer-run, with all proceeds going to promoting and maintaining the site.”

Vagts clarifies that while “the website is completely separate from the tourism, the bureau has been extremely supportive of our work and very welcoming to LGBT couples.”

As happens all too often, some are committed to denying equal rights to fellow citizens. Iowa is no exception.

Carolyn Jenison, Executive Director of One Iowa, the state’s largest GLBT advocacy organization, comments on last November’s firing by voters of Iowa Supreme Court judges who allowed gay marriage: “In many ways, the vote to remove three of our well-qualified justices has a been a wake-up call. For proequality advocates, it’s a reminder that we need to do a better job at countering the influence of out-of-state extremists on our judicial system.

“Nearly a million dollars was spent by opponents of equality to smear our justices, and influence our system. Iowans don’t like being told how to think or vote. Going forward, the best defense we have to counter this influence is to have everyday Iowans speaking out about why a fair and independent judiciary is important to them. That loss hurt, but we still have time to protect the independent judicial system that has served Iowa so well over the past few decades.”

Jenison points out, “I haven’t spoken to a single couple who has had a negative wedding experience in Iowa. Iowans, by and large, are fair-minded and welcoming. Whatever one thinks about [same-sex] marriage, the couples that have celebrated their big day in Iowa have been treated to the hospitality and respect we expect in the heartland. Across the state, businesses and faith communities have opened their doors to welcome couples that choose to marry in Iowa.

CJ Lucke of San Diego, who recently wed Jessica Cummins in Decorah, affirms, “The people in Decorah really did welcome us, from the County Clerk to the florist who created our bouquets in an hour to our minister who has been an incredible advocate for the gay community. It made our wedding day perfect, especially because we had eloped, and it was just the two of us.

“It would have been easier to fly into Des Moines, but it was important for us to be married in a church, because my partner is a practicing Catholic. When we saw the little white steeple on this historic Lutheran Church in Decorah, we knew this was the place.

Lucke continues, “People ask why it is important to be married, and not just have a civil union. All you had to do was see the reaction of everyone when we returned from our ‘elopement.’ Both of our families and friends know what it means when someone is married. It is a very public commitment, and a legal contract that is celebrated by our society. We do not yet have a way to celebrate civil unions with the same emotional community support that a wedding conjures up for people.

“Shocked, happy, upset, overjoyed—we had a variety of responses to our announcement—but all of them were very deep, because people know our decision was serious, and that we went all the way to Iowa to make our point: We’re married. Just like you.”

Balk and the Decorah Convention and Visitors Bureau continue to welcome one and all.

As Balk puts it, “We’re ‘small-town trendy,’ and can offer friendly service, amazing food with local flair, as well as one-of-a-kind accommodations nestled in a rolling-hills and bluffs region whose beauty can’t be beat. Who wouldn’t want to get married in Decorah?”