Imagine a world without dance. I’m not talking about Swan Lake, which even the God Police would condone, because it looks about as fun as flagellation, but rather a world without a whole lotta shakin’ to a loud, outrageous beat. Fine, I guess, if you’re sitting in your Barcalounger, as we glimpse the Reverend Moore, responsible for this edict in the small town of Bomont, where Bible-thumping is the primary entertainment. But not possible if you’re a hormone-driven teenager-in-exile such as Ren, recently expatriated from Chicago, where his Dad walked out on him, leaving rock and roll as the most effective antidepressant in the boy’s pharmacy of emotions. I feel a High School Musical coming on…. 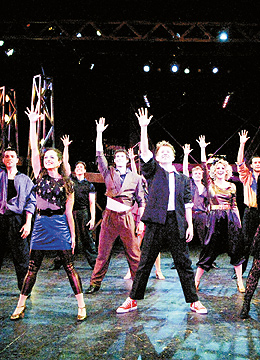 It’s called Footloose, and it’s based on a true story coming out of Oklahoma in 1980, when kids petitioned to ban the ban and hold a prom. That news byte became a Broadway musical in 1984, then a 1988 movie staring Kevin Bacon.

Yet, this isn’t West Side Story, either. You can spot the predictable happy, uncomplicated ending in the first five minutes after the train pulls out (great sound-and-light effects, and great Freudian symbolism, to boot). But we’re here for the ride—and it’s a trip!—as city-boy Ren eloquently pleads the case for reinstituting the prom (Bible references in hand), softening the well-meaning but misguided heart of the preacher, and winning his daughter as his squeeze: good, clean, kick-your butt (and I quote) fun.

And did I say lively? This is a musical on steroids. The plot is sugar-high frosting on the cake, whose recipe is based on dynamite dancing that tears up the stage (choreographer Tamara Kangas Erickson at her best), with a back-of-stage band conducted right on the money by Kyle Clausen, and a multitalented ensemble whose vocal cords are as strong as legs that make the Energizer Bunny look like a slacker.

Leading the pack is Ben Bakken as Ren, the urban misfit who ignites the show in the opening title song. As poster boy for rock and roll, he’s also as socially adept as a motivational speaker (unlike any teenage boy I know—though it has been a while since Bakken saw 16). He’s also a most convincing crooner in romantic duets with Ariel, the minister’s daughter. If anyone steals the show, it’s sassy-sweet Zoe Pappas as the gum-snapping Ariel, who gets to wear red cowboy boots as she wraps the town’s kids around her pretty little finger, yet demonstrates understanding and affection for her loving but benighted parents, with never a surly eye-roll or “whatever.” Chan vets David Anthony Brinkley and Michelle Barber play Ariel’s parents with heartfelt warmth, underscored by the poignant vocals that come their way.

Yet, under Michael Brindisi’s tight and stylish direction, it’s Bomont’s teens who belt and prance their nonstop way into our hearts from venues that include a gas station (complete with Harleys); a locker-lined high-school hallway; a drive-in with its roller-skating carhops; and, of course, the gym, where, yes, the kids can hold their prom. If the government’s searching for a renewable-energy source, look no farther than this production.