The Queen is coming to Minneapolis! No, not the Queen of England. We don’t care about that Queen. We’re talking the Queen all gay men worship: Kathy Griffin. We can thank Hennepin Theatre Trust for getting us five amazing shows at the Historic Orpheum Theatre in Minneapolis (the most the comedian ever has done at a single venue). 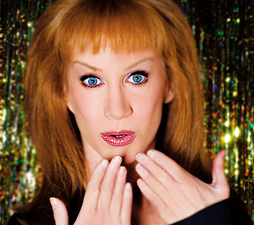 As Lavender spoke by phone with Griffin, before even a hello was said, she yelled, “I have five shows in Minneapolis! How great is that? The Minneapolis gays must really love me.” Yes, that’s right—we do love her.

“I don’t think there are 10,000 gays [in Minneapolis]. I think it’s all the gays, the girls, and then their husbands and boyfriends who are, like, ‘Why am I here?’” Griffin continued. “All the gays are sitting down enjoying the show, and then, you have the straight guys stumbling down the aisle with a beer in each hand.”

The mention that the Saloon bar is just down the street from the theater brought on from Griffin, “Of course there’s a gay bar right outside the door. Why wouldn’t there be?”

But, then again, this is also the woman who so blatantly told Jesus to suck it when she won an Emmy in 2007, about which she told Lavender, “I do have some plans to top my last speech. But it’s kind of hard after you tell Jesus to suck it. And I must admit, I want to win. I’ve been there, and it’s not an honor to just be nominated. I have lost, and I have won, and I’m saying now that winning does matter. I told my Mom that I loved my Emmy more than her, and she said, ‘God damn it!’ and took another drink.”

Would we expect less from Griffin? Probably not, because what fun would that be? Apparently, she was able to top last year with her recent win, when she gushed, “Well, well, well! Here we go again, fuckers.

Here we go again!…Hanks, Gandolfini—what the fuck! I’m not going to tell anyone to suck it. I would make love to this thing [the trophy] if I could.”

Let’s not lose track, but get back to Griffin’s mother, about whom she shares, “My mother actually thinks she’s bigger than me. She’s like Heidi Klum. She only does the Victoria Secret runway, and that’s it. You know, she got a gay to take her to the ear doctor the other day. He came up to her, and was, like, ‘Aren’t you on the D List?’ and she was, like, ‘Yeah,’ and got him to take her.”

As for the rest of the D List stars, we might or might not get to see Team Griffin, as Griffin quips, “I don’t know if they will be there. They think they’re so important now that they are stars.”

Speaking of importance, Griffin talked about her rider. Every star has a rider, and the bigger you are, the more outrageous your rider gets.

In Griffin’s words, “You know what? I think I need a new rider. Mine is so fucking pathetic. The guys in New York made fun of it. I think I’m going to start peeking at, like, Celine Dion’s and Bette Midler’s to see what I need. I’m, like, ‘I want water and the room at 65 degrees,’ because I sweat that I’m so excited to meet people. Actually, I want to do something so outrageous, and have it leaked to the press, so they are like, ‘Kathy is so demanding.’”

The discussion segued to the recent Republican National Convention, and, of course, the Log Cabin Republicans.

According to Griffin, “I don’t get the Log Cabin Republicans. It’s like they are rebelling against something, I don’t know what it is. Maybe they had gay parents or

something. It makes no sense.”

Sadly, though, Griffin had not heard about it, but did add, “You know, every time I go someplace, they want me to go out. I just don’t fucking get it. But I love it!”

As for Griffin’s post-Minneapolis plans, aka Season 5 of My Life on the D List, she had choice words: “They should renew, but, um—how do I say this?—we’re in talks, and I am talking to other networks. You know they only released Season 1 of the D List. What the fuck is up with that?”