Cirque du Soleil has been the name many think of in connection with circuses over the past two decades. It has taken acrobats and other typical circus acts, and turned them into eye-popping spectacles around the world that leave audiences in awe of what they’ve just witnessed. What began in 1984 as part of the celebration surrounding the 450th anniversary of Jacques Cartier’s arrival in Canada has mushroomed beyond all dreams. 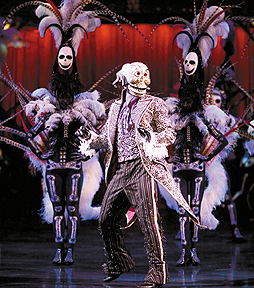 Luc Tremblay, Senior Artistic Director of the newest traveling show, KOOZA, spoke with Lavender about Cirque du Soleil and the new show. He has produced more than 40 choreographic works for professional dance, theater, and circus companies, as well as for dance schools. KOOZA marks his third show with Cirque du Soleil.

For people who aren’t really familiar with Cirque du Soleil, can you explain a little bit about it?
The company was founded 25 years ago, from a very small group of street performers from Quebec City. Over the years, we’ve created 25 productions. This year, we just created our 25th production. We have 18 or 19 productions going on all over the world right now.

Cirque du Soleil means “Circus of the Sun.” Anything behind the name?
The reason it was named “Circus of the Sun” is that the founder was in the process of starting the company with his fellow artists. He was in Hawaii, it was very early in the morning, he saw the sun coming up, and he really enjoyed that moment. He did some research on the significance of the sun, and basically, it means joyful, youth—and this is really what he wanted to focus his efforts on, what youth can do.

How are the traveling shows different from the resident shows in New York and Las Vegas?
The resident shows’ theaters offer more possibilities, because the theaters are actually built for the shows, there are elevators, and the stages are more advanced. For the touring shows, you have to create a touring kit that you can mount and dismount very easily. It takes about a week to do. It needs a simpler rigging system.

With the tent, you really feel that you’re in the circus. You’re closer to the performance,you’re more “in” the show, where with the theater, you’re in the seating. The tent was also our beginnings, and we want to stay faithful to our beginnings, but we’ve expanded to theaters and the other things. Permanent shows: You can only attract people in the city, as opposed to going to a city to show your show—you can go into smaller cities—and we’ve also transformed to go into arenas.

How many people are working for this show?
There are 53 artists, about 125 to 130 people touring. We bring in flying technicians from Montreal when we set up and dismount the tents. They help us do the transfer. Locally, we hire about 50 stagehands, plus about 100 for the run—ushers, wardrobe, security—all of that.

How was this different from the other two shows you produced?
Actually it’s my third, along with La Nouba, and DELIRIUM, which visited St. Paul. It’s my first big-top experience. La Nouba was in Atlanta [as a permanent show]. DELIRIUM was fast-paced—two cities a week. KOOZA is a couple weeks per place. I really like the atmosphere of the big top. We have another tent behind the big tent. We call it the artistic tent. There’s a nice atmosphere in there. It’s like a family. They are sharing that space preparing for that show. There’s a feeling of almost being on the street with them.

Are any elements in the show very Cirque du Soleil?
I think that acrobatic performance level is just spectacular. The clowns are brilliant—and especially on this show, we worked very hard to make them funny and enjoyable for all ages. The high level of performance and the proximity of the audience make for a very big wow factor.