The circus once was the place to go to have your imagination stimulated: You got to see exotic animals perform tricks with people standing right next to those sharp claws, not afraid to stick their heads between the jaws of a powerful lion. Gone are the days where three-ring circuses could wow children, parents, and adults, all at the same time. What is not lost, though, is the desire to dazzle an entire family in one setting. European cirque-style performances are very capable of doing just that. 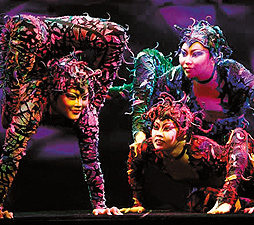 Neil Goldberg, who created one of the most successful American cirque-style companies in 1993, explains the difference: “Euro-style cirque shows really date back to the 1800s in Paris, and these shows were always designed in the much more theatrical point, with one focal point, unlike the American circus, where it is the three-ring style with animals.”

With a background in theater, Goldberg has traveled the world, finding talent he has brought back to America, and combined with his knowledge of theater to create the overwhelming success that is Cirque Dreams.

As Goldberg points out, “We’re very different in the respect that our shows are designed in stages, and not tents. So, we can take full advantage of the height and width of the stage. For those who have seen Soleil, they are going to get that, and a lot more. The theatrical aspect of using a jungle setting and transforming 26 artists into the elements of nature really creates a point of view that’s never been done before, and that’s why it’s the only show that’s ever been performed on Broadway.”

Yes, the Jungle Fantasy experience is coming to Mystic Lake directly from Broadway with the exact same cast.

When asked about performing on Broadway, Goldberg replied, “The Holy Grail is Broadway. And now, I’m just waiting for Tony nominations.”

Goldberg hopes that his show will be one of the few lucky ones to be nominated—and possibly win.

As for Jungle Fantasy itself, Goldberg believes, “It appeals to so many different senses, and has something for everyone. I think parents can bring their kids and grandparents, and be completely mesmerized and entertained, and [each will] get something different out of it. Theater-goers will get that experience, with its two acts and original score. Circus people are going to get the acrobatics out of it. And children will have a little of everything.”

As for outdoing the only cirque show ever to be on Broadway, Goldberg chuckles, “I know the answer to it, but I can’t tell you.”