It’s a wonderful and terrible bit of irony to learn, only now, that such a thing as circus school exists. When I was growing up in rural South Dakota, the only available extracurricular activities outside of sports (I am not competitive, and getting kicked in the head makes me unhappy) were the budget-challenged band and a ragtag chorus. 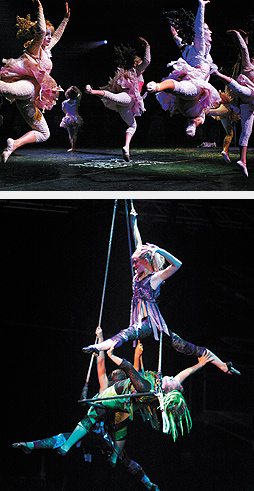 In a cruel twist of fate, long after my ligaments have lost their youthful pliancy, and my bones their miraculous ability to heal, I have been introduced to Circus Juventas—a nonprofit organization that coaches students aged 3 to 21 in myriad multicultural circus arts. Thus, I found myself experiencing a twinge of personal regret at its recent show, RavensManor, while focusing my one remaining physical gift—20/20 vision—on a quite extraordinary performance.

Dan Butler, founder and Executive Director of Circus Juventas, is sympathetic to my teenage angst of yore.

“We founded the organization to give kids an outlet to do something different,” Butler says. “We always know the arts are cut first from public school. And when you’re in high school, if you’re not good enough, you’re cut from the team. The opportunities people have here in America just aren’t found in other places throughout the world. But when competition is to such an extent that it’s all about winning or losing, then the pendulum has gone too far.”

Unlike most school sporting activities, Circus Juventas makes sure every child involved with the program is trained to maximize his or her talents, and given an opportunity to perform. It naturally embraces a wide variety of skills, so whether the child is flexible, strong, or just likes to make people laugh, he or she has a place inside the tent.

However, Butler takes the circus and

its inclusiveness one step further by disregarding traditional gender roles within the program.

Butler explains, “We’ve had girls that do traditionally boys acts, because we don’t have any type of stereotyping and cliques.”

Furthermore, within any big top, a wide variety of body types are valued equally. For example, bigger, stronger performers are needed toward the bottom of an acrobatic formation to support smaller teammates toward the top. That kind of variety doesn’t translate so well to ballet, where thin is “in,” regardless of other abilities, or basketball, where height is trump. All in all, an activity that actually benefits from different types of people—big and little, male and female, all with different skill sets working together—is relatively unique.

Not surprisingly, a cooperative mentality seems to develop within a circus environment surpassing that of other team sports.

According to Butler, Cirque du Soleil had an intensive study done on children and the circus arts that found this type of activity had the greatest impact on their lives.

Butler notes, “You get the endorphins going like with other sports, but when you put kids in an environment, and you put it so that one kid is dependent on the other for safety, it was the most positive outcome of anything they did.”

Based on that study, Cirque du Soleil went on to establish 25 circus programs for homeless youth in South Africa alone, with more than 40 locations worldwide.

Butler finds that the circus has equal value for children here in America. He includes any child who is interested. He or she may have little natural coordination or balance, be dealing with shyness, or come from a broken home.

In addition, Butler confidently takes on children who may be unpopular with their peers, for within the walls of the circus, any form of hazing is strictly against the rules.

Butler states, “You can’t be here if you’re not respectful. And the kids have to sign off on a document, and it spells off all the things that are important: attitude and behavior and respect and attendance.”

Year after year, the feedback Butler receives from parents is nothing short of extraordinary.

Of course, Circus Juventas puts on one hell of a show. It’s sometimes difficult to remember that the intricately costumed performers are neighborhood kids. However, it’s important to Butler that his school not be held up to the same kind of criticism that an organization like Cirque du Soleil would be.

Butler shares, “What I like to tell audience members is that these are neighborhood kids performing for fun, and we hope they will always come to support the work they do, not come to do some critical review.”

Indeed, that kind of mentality would not honor what Butler’s circus truly is. It’s about watching some virtuosic performances, and also about imperfections. Things don’t always go according to plan. In that way, it’s similar to watching an Olympic gymnast push her own boundaries on the balance beam, hoping for the best performance, but fully conscious that she may fall.

No less riveting is when you acknowledge the possibility of failure. I was on the edge of my seat at the last show, watching a young man who was—I’m guessing—not having his best night. He was an aerialist experiencing a great deal of difficulty completing a successful catch with his team partners. It takes a lot of trust to put yourself in the hands of your fellow team-

mates, as well as an incredible amount of strength and determination to keep going even when things are going wrong. But he persevered, and the audience responded appropriately—with tremendous applause.

“Every single thing we do is passively spotted. That means there is the appropriate regulated crash pad underneath it,” Butler emphasizes. “In addition to passive spotting, there’s also the spotter, who is the instructor. Most any act above that height that doesn’t have a natural safety device incorporated into the equipment—there are safety lines. And if the safety lines are not sufficient, there’s also a net.”

In the 14 years that Circus Juventas has been operating, only a handful of injuries have taken place, almost all of which were so insignificant, they did not require medical attention.

Of his strict policies on hazing, respect, and safety, Butler muses, “I feel a lot of our values aren’t old fashioned, but to a lot of people, they seem that way.”

Sadly, the fall show has closed, and the next big top performance will not open until the spring. However, if you missed RavensManor, a special performance incorporating the show’s highlights will be staged at a four-course fund-raising dinner on October 4. It brings in much-needed funds for the nonprofit circus, which takes its top students all over the world to compete.

If you attend, and the thrill of the circus leaves you itching for the feel of chalk dust and ropes, Circus Juventas offers a few classes for adults. However, Butler warns that they are, predictably, perpetually filled.

However, adults who wish to develop their aerial skills have another option in the Twin Cities: Xelias Aerial Arts Studio in Northeast Minneapolis.

And please, if anyone is starting a “Swim with the Dolphins” camp or a “Hook Up with Your Favorite Celebrity” community education class, do let me know.