Chris & Don: A Love Story, The Triumph of Gay Love

The 34-year relationship of Christopher Isherwood and Don Bachardy is truly one of history’s great gay love stories. If you want to see how these two brave souls succeeded in love, don’t even think of missing the shimmering new documentary Chris & Don: A Love Story, directed by Tina Mascara and Guido Santi. 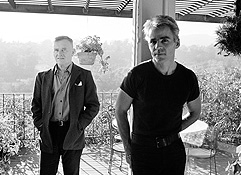 The film—a panorama of the 20th Century as well—relates Isherwood’s repressive upper-crust British upbringing that drove him to prolonged stays in Weimar Berlin in the 1920s. There, he felt free to explore homosexual desire. Out of this experience came his beloved Berlin Stories, which was the basis of the play I Am A Camera and the musical Cabaret, as well as the inspiration for Armistead Maupin’s Tales of the City. The bloody ascent of Adolf Hitler and the Nazis in 1933 brought down the permissive Weimar era.

Isherwood traveled to other parts of Europe and to China with poet and intimate pal W.H. Auden. In 1939, they immigrated to the United States, where, in 1952, in Santa Monica, Isherwood met 18-year-old Don Bachardy. That was 17 years before Stonewall, in a time when gay relationships were deemed unspeakable, and gay subculture itself often judged viciously against intergenerational gay love for its assumed “mutual exploitation.”

The documentary, which faces the intergenerational aspect directly, actually rescues the concept of mentorship in relationships.

Santi stresses, “We were not judgmental about that, because we knew there was an honest, sincere love and attraction that they had for each other. There are a lot of prejudices about age difference in relationships. We were convinced and we strongly believed that though the biggest obstacle was the age, they were in love, and there is no doubt about that.”

It’s right up there on the screen. What’s miraculous is that we see and hear in Bachardy’s own words, gleaned from interviews done specifically for the film, how he forged his own identity as both a man and a superlative artist, separate from Isherwood, while they remained committed to each other. Chris & Don also has riveting footage of Bachardy painting live young studs with his bold use of color.

Mascara explains, “We wanted to make it as personal a story as possible from Don’s point of view. We didn’t want to rely on external narration, and we wanted to make sure we equally felt the presence of Christopher Isherwood and Don Bachardy. And the way we evoked Christopher Isherwood was through the reading of his diaries—through actor Michael York.”

You’ll want to read some Isherwood after you’ve seen the film, so consider his gay midlife novel A Single Man and his memoir Christopher and His Kind.

As queer as Chris & Don is, it appeals to a broad general audience in the universal way that Brokeback Mountain did—only light years more optimistic.