Charles Nolte died January 14 after a two-year struggle with prostate cancer. He was 86.

Tall, strikingly handsome, with keen blue eyes, Nolte always looked the part: in real life, in his Navy uniform, serving 1943-45; onstage, bare-chested in the title role of Broadway’s Billy Budd (1951); or an adored professor of theater at the University of Minnesota, where he taught for more than 30 years. 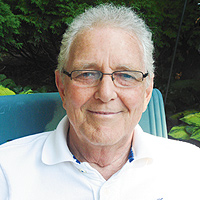 Nolte’s teaching followed a distinguished acting career, among the most notable, Billy Budd, and opposite Henry Fonda in the premiere of The Caine Mutiny Court Martial in Los Angeles, then on Broadway (1953-55).

Nolte’s last stage performance was in 2008 at Mixed Blood Theatre in Roy Close and Bill Seaman’s Exit Strategy, in which he played the role of an elderly, alcoholic, soon-to-be homeless gay man, imbuing even that character with his signature dignity and wit.

Last year, Nolte donated his papers, photographs, and copious journals to the University of Minnesota’s Jean-Nikolaus Tretter Collection as the Charles Nolte Collection for the Performing and Cinematic Arts.

Following a recent brief hospital stay, Nolte returned to his beloved home, alert and cheerful for several days before suffering a marked decline. He continued to rest comfortably, able to indicate he was enjoying the operas playing on TV. That last afternoon, Nolte, a few close friends, and Terry Kilburn, his partner of more 50 years, listened to Verdi’s Aïda, then Bellini’s Norma.

As the final notes faded, and the TV audience cheered, Charles Nolte, gentleman and trouper, slipped away to the sound of applause.