The Guthrie Theater’s Kushner Celebration is off and running with an acclaimed area premiere of the Tony-nominated musical Caroline, or Change, starring the superlative Greta Oglesby. It won the UK’s most prestigious theater awards for Best Musical: the Olivier, the Evening Standard Award, and the London Drama Critics Circle Award. 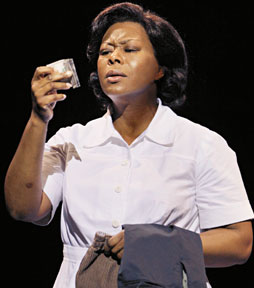 Tony Kushner wrote the book, or what actually can be called a libretto, meaning he penned all the lyrics for what is essentially an opera. Jeanine Tesori composed the music, which draws from a remarkable variety of styles: rhythm and blues, gospel, klezmer, and classical.

By contrast with other Broadway musicals, in director Marcela Lorca’s words, Caroline, or Change “is really pioneering in a different style. It is a musical, but it has a very different dramatic structure. It’s more like a play. That is to say, it relies on a very strong dramatic structure as plays do, but it is entirely sung from beginning to end, unlike most musicals that have scene work which is spoken, then you tip into song when you need to reach another emotional level. The play has very few lines that are spoken.”

Caroline, or Change, Kushner’s homage to the 1960s civil rights movement, loosely is based on his boyhood relationship with his African-American maid in Lake Charles, Louisiana. He examines the social structures of his upbringing, as well as the interpersonal.

Lorca explains, “It looks at economic structures and at racial structures in the 1960s—at the division between class and economics. But it also looks at what unites us and what’s common in the human experience. It’s about quite intimate relationships between people who live in very different socioeconomic structures. And at the same time, they are trying to support each other, but they are divided by the conditions of society and the history of the time.”

As with Angels in America, Kushner brings the fantastical to Caroline, such as a talking moon. Appliances come to life in the basement where Caroline labors.

Kushner shares, “I like the way that magic works onstage, because theater is so much about illusion, and the audience’s ability to see through illusion to sort of simultaneously take in what’s real and what’s not real, and process both of those things simultaneously, which I think is an enormously important part of what makes theater work—the fact that onstage, the fantastical things, things that can’t occur in reality, are also taking place. It sort of adds to the fun and the complexity of the theatrical experience. I believe, at least in terms of the way we experience life emotionally, there’s a kind of plasticity and permeability of reality in certain moments.”