For nearly two decades, superdiva Camille Collins has graced the stage at the Gay 90’s. She’s best-known for her rainbow-colored showgirl costume with a bodacious headdress, performing her signature song, “Justified and Ancient,” by The KLF. 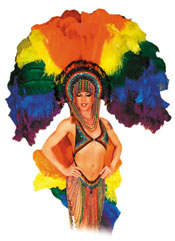 This legend began her career as “Camille” on February 15, 1990, at the Town House. She made her first appearance at the Gay 90’s in June 1990 during Gay Pride Month, when she competed in the Miss City of the Lakes Pageant. Although she didn’t win, rechristened “Camille Collins,” she was invited to perform regularly at the old Club Casablanca upstairs at the Gay 90’s. In 1996, an expanded second-floor space was renamed the La Femme Show Lounge. Among many other titles, she was Miss Gay 90’s 1998.

Collins says, “I would like to thank the management of the Gay 90’s for 19 wonderful years of performing there for the community.”

What does the future hold in store for Collins?

As Collins shares, “It’s cliché but true: All good things must come to an end. But this only pertains to my time at the 90’s, not to Camille Collins. I will be staying in Minneapolis, performing on occasion at the Town House, Rumours/Innuendo, and other bookings, as well as doing freelance theater work and independent contractor work.”

You may contact Collins at [email protected] for bookings. Watch Lavender Magazine for her upcoming shows.