“At breakfast, we start planning what to eat for dinner,” A.C. Bourdier says. “Here, it’s all about food.”

“Here” is Lake Charles, in the southwestern corner of Louisiana, and Bourdier is its self-appointed historian. Never heard of Lake Charles? Well, neither have those uppity folks in New Orleans, he contends: “They think the world ends at the Mississippi River. Their gumbo,” he sniffs, “is nasty stuff.” It’s thickened, Creole-style, with—oh, my heavens!—okra. Here in Cajun country, roux is the thickener that rules. 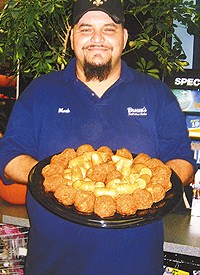 The country he’s talking about is “no-man’s-land”—well, before the “awl” boom that created millionaires who still shop at Walmart, and swear by mama’s cooking. After the French deeded New Orleans to the budding United States, those of less genteel persuasion—“carpetbaggers, outlaws, and general riffraff” like Jean Laffite, the pirate—headed westward to herd cattle, cut timber, and grow rice.

“Awl” money or not, the scions living in them don’t look kindly on anyone who messes with the recipes of their mamas (Emeril would be bammed out of town). Especially if it’s gumbo. “There are as many recipes are there are cooks,” Bourdier swears, but all agree the dish starts out with the Holy Trinity: sautéed onions, celery, and sweet green peppers. Next, brown your meat, and add it to some broth—or go with seafood. Finally, thicken the pot with a scoop of long-stirred roux (equal parts of oil and flour cooked until the color of black coffee). Serve it over rice. “We make a huge pot to put in the freezer, but there’s never any left over,” Bourdier insists.

Maybe the only thing more venerated than a pot of gumbo is a mess of boudin. Cajuns are hardscrabble country folk, descended from the 18th-Century French chased out of Canada—Acadia—who ended up in the Louisiana woods. So, their victuals are composed of anything that couldn’t hide, and didn’t cost a cent. Thus, boudin is a sausage of sorts—an equal mix of cooked rice and cooked meat, which can be anything from crayfish to pork, along with its liver—seasoned with onions, garlic, celery, and such—then forced into a casing, and boiled or smoked. Or patted into balls, and deep-fried—even better.

Everything is deep-fried here, even fat. But Bourdier doesn’t have any time for the health police. “Go ahead and enjoy it,” he dictates. “It’s a long time between meals in heaven.”

Boudin is so highly esteemed that a Boudin Trail has been launched—like the wine trails in Napa, but without a designated driver—because who in the entire world would volunteer to sit back, and just watch people eat it?

First stop: Brown’s Market, whose boudin calls on cooked pork, with a side of boudin balls. It is also the place to head for alligator meat, quail eggs pickled in Cajun hot sauce, and sweet Louisiana shrimp. As the checkout girl instructed, “You don’t know how good our shrimp is until you go to Georgia, and can’t get it.” Also, pick up a jar of ready-made roux, Katie, a busy young mother who uses it in her “made-from-scratch” gumbo, counsels, adding, “Just put it in a pot and”—wink, wink—“bring it to your father-in-law.”

Patriarchs like him set the bar high. They head to Seafood Palace (none too palatial) for their boudin balls, with a pistolette on the side—a sandwich composed of a torpedo-shaped roll that’s deep-fried (naturally), then filled with spicy etouffee.

For seafood sausage, though, you’d best hop back on the Boudin Trail, and head on to Hackett’s Cajon Kitchen, a truck stop operated by old-timer Charlie Hackett, who turns out a dozen varieties of boudin, from alligator to turkey; from mild (hah!) to spicy; from boiled to smoked.

Best-seller: the spicy pork-and-liver mix. His secret? “I’m a contrarian,” Hackett attests from a table that serves as his office. “I make my sausage using sage. You get a whiff, and say, ‘That’s nice!’ That’s the way it oughta be.” Behind him stand five Rolodexes jammed with recipe cards. Each represents a local hunter’s own formula for boudin that Hackett will custom-make after the customer brings in his deer. He also does a number on a sweet crayfish boudin, a “new” recipe of 30 years’ trial.

“When is the proper time to eat boudin?” we ask. And we like what we hear: “Any time of the day, any day of the week.” Bring it on!

To taste for yourself, visit www.discoverlakeccharles.org, then hit the road.