Minnesota Mayhem Rugby Football Club fast is becoming something of an institution locally. They’ve become nearly legendary in the GLBT community for their hard-nosed play on the field, and their wild antics away from it. They’re a group of gay men who famously leave their opponents as black and blue as the panels on their uniforms. But recently, the Mayhem accomplished something pretty remarkable away from the field. 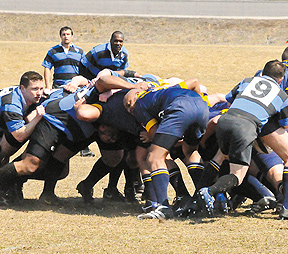 We’ve all heard of the Mayhem, but what is rugby, exactly?

Well, imagine a soccer game where you’re allowed to use your hands, and the players do literal battle over a leather-swathed oval with attitude. That’s what rugby is. It’s a game where tackling is not just allowed, but also highly encouraged. One of the game’s official maneuvers is described as “mauling.” OK, now, imagine 80 nonstop minutes of that, and you’ve got an idea of what rugby is.

Then, partying with opposition afterward. More than the pitches and the marks, the rucks and the scrums, rugby’s “third half” well might be the rugby-est aspect of rugby.

So, what is the Mayhem’s remarkable, away-from-the-field accomplishment?

The team just brought the next Bingham Cup, gay rugby’s equivalent of the Super Bowl, to the Twin Cities metro. The Mark Kendall Bingham Memorial Tournament will be held at the National Sports Center in Blaine in June 2010. That event is named after Mark Bingham, one of the airline passengers who famously took Flight 93 back from the terrorists on September 11, 2001.

Bingham’s story resonates with Blair Dempster, the Mayhem guru of marketing, sponsorship, and fund-raising, who recounts, “Mark Bingham started playing rugby with a straight team when he was 16, but felt he had to keep his sexuality a secret for fear of total rejection. When he started playing with the [gay rugby team] San Francisco Fog, he felt as though his ‘two irreconcilable worlds came together.’ That’s a huge sentiment that I know a lot of gay men and women could relate to. I know I can. This message doesn’t limit itself to rugby. As the GLBT community continues to grow, this kind of aha moment is going to happen more and more. And that’s an unbelievable thing.”

But the Bingham trophy is more than a bright, shiny object with an inspiring history. It’s the capstone of a tournament fought between 32 teams. As big as that is, there’s more to it than: “What this tournament represents is bigger than rugby.”

Dempster insists, “Not every gay man is going to join a rugby team. Don’t get me wrong—I think it would be an amazing if they did. But I think anyone can apply the message Bingham Cup promotes to their lives…just in different ways.”

The competition for bringing to the Twin Cities the tournament—whose previous incarnations have been hosted by San Francisco, London, New York, Dublin, and Washington, DC—was at least as fearsome as what happens on the field. Like those contests, teamwork is what won the day.

Dempster shares, “It’s a great example of how the Mayhem do anything. When something needs to be accomplished, everyone comes together, and attacks it. We do a great job, and if asked about it later, all we really can remember is the team effort, not individual accomplishments.”

But the reality of hosting the tournament looms in the not-too-distant future, a responsibility not lost on team captain Joe Vollmer.

As Vollmer enthuses, “It’s been such a incredible event. We thought we could take this on ourselves, and actually improve it. We wanted to make it an event that focused more on rugby. We’d still have the fun aspects—the parties, the bonding, the people from around the world getting together. We strongly felt that with the expertise we have here in Minnesota, it’s something we could take on here, and really raise the caliber of the rugby that’s played, and raise the caliber of the event itself.”

Dempster remarks. “We want to be the best team we can be, and are doing everything in our power to make that happen. Largely, this is for our own self-interest. But by being a team, we have the chance to be role models for gay people who have always wanted to play sports, but never thought they could. Or even better, we have an opportunity to give them a second chance to play a sport. Most importantly, the members of Mayhem are brothers on and off the pitch. And I think anyone would be lucky to find a family like the one that I found.”