Brideshead Revisited is back at last!

A quarter century ago, the 11-part 1981 British TV miniseries adaptation of Brideshead Revisited wowed the world. This time around, it’s a handsome Miramax film, starring handsome actors, with handsome sets and costumes. Currently, the sure-to-be-box-office sensation, directed by Julian Jarrold, is screening at the Landmark Theatres Edina Cinema. 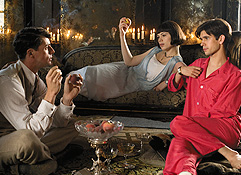 Both the film and the miniseries are based on the acclaimed novel—published first in 1945 and in a revised definitive edition in 1960—by British literary giant Evelyn Waugh (1903-1966). Much of the early part of the tale is autobiographical, derived from his experiences at Oxford in the 1920s, including a homosexual dalliance.

Waugh converted to Catholicism in 1930, and his newfound religion inculcates Brideshead Revisited. On one level, it’s an allegory about sin and redemption. In the Preface, Waugh wrote that its theme is “the operation of divine grace on group of diverse but closely connected characters.”

Those Catholic overtones don’t detract from Brideshead Revisited being a damn good love story. In its two-hour film incarnation— which required markedly paring down some things and shifting around others—the triangle of Charles Ryder (Matthew Goode), Sebastian Flyte (Ben Wishaw), and Julia Flyte (Hayley Atwell) is now central. As Oxford students in the 1920s, Charles and Sebastian form a homosexual relationship. A decade later, Charles has an affair with Sebastian’s sister, Julia.

Appropriately enough, all the actors in Brideshead Revisited are Brits. Goode, Wishaw, and Atwell aren’t yet household names, but Academy Award-winner Emma Thompson is, portraying Julia and Sebastian’s mother, Lady Marchmain, the calculating Catholic matriarch of the aristocratic family.

Getting down to the prurient, did Charles and Sebastian really do the deed? Everything I’ve ever read tap-dances around this question. However, Waugh really settles the point in the novel by having Charles years later narrate that he and Sebastian had engaged in a “naughtiness high in the catalogue of grave sins.” It’s an understated reference to the traditional Catholic theological tenet that sodomy is one of the Four Sins Crying to Heaven for Vengeance, the worst possible mortal sins. Thankfully, the gay sex angle is more explicit in the film than in the miniseries.