Brendan and his Many-Colored Dreams

Brendan Bujold could feel the pressure of the big 3-0 looming in the not-too-distant future. For the Edina-born performer who’d launched his stage career at San Francisco’s Children’s Playhouse at age 6, it was time to face the big decision: bright lights/big city if—maybe, maybe—he made good in New York; or singing his way into the hearts of Middle America not far from a cornfield. 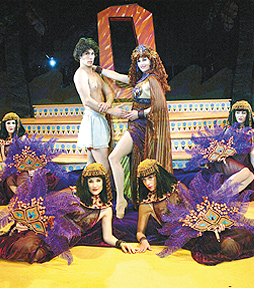 While appearing (for the second time) as the lead in Joseph and the Amazing Technicolor Dreamcoat at the dinner theater, with star billing, an Equity contract, and a secure run that put an end to waiting tables, after about 15 minutes of soul-searching, Bujold opted to make Minnesota his home. He’s back in the midst of his family, along with the acquired family of other young theater professionals. In fact—so much for bright lights—his New York-based boyfriend is pulling up stakes to join him here.

OK, truth in advertising: It’s not like Bujold hasn’t already had more than his young share of singing and dancing his way around the globe. At 17, he was selected as an Up With People trouper, touring the United States and Europe—“a chance to stay with 85 different host families, and share time with 170 other kids from 23 countries. My eyes were opened,” he declares.

So agape, in fact, that Bujold returned to a language school in Germany before enrolling in the Boston Music Conservatory, where he trained to be an opera singer. But even then, family ties prevailed—or dementia. Go figure. He returned to Minnesota to earn a degree in music and German at Concordia College, Moorhead, which he painfully recalls as “not a cultured community”—in fact, “a huge wasteland.” But his German and business skills won him an internship with Mercedes Benz back in Germany. “At that time, I was heavy into politics, very anti-American during the Bush Administration,” he explains.

Upon returning to an internship in San Diego in 2006, he learned that his college music prof had sent Bujold’s résumé to Chanhassen Dinner Theatres, which invited him to audition for the role of Arab in West Side Story. He enthuses, “I got the role! An Equity contract! I was very excited, surrounded by all that talent.” He readily put down roots in the Twin Cities acting community, got an agent, and promptly auditioned again at Chan for Grease. “They offered me the lead, as Danny. It was hugely exciting!” he remembers. He then moved with the show to the Pantages Theater in Downtown Minneapolis—“like going on tour, a whole different audience,” he adds.

Next came the lead (is this getting predictable, or what?) in Chanhassen’s Joseph. “We made it campy, and had a whole lot of fun with it,” Bujold notes. Plus, they paid him to wear that knockout many-colored, flowing, silken coat.

That’s about as good as it gets in Minnesota. Yet, an actor can’t help but muse: “What if? Could I make it on Broadway?”

In September 2008, Bujold left for New York City. He got an apartment, a boyfriend, and an agent who found him roles in commercial and TV work. “It was good money, but not my passion,” he insists. So, when the call came—again—that Joseph was being reprised at Chan, it carried with it that nigh-onto-30 decision.

Bujold is back for the long haul. He shares, “Here, it’s less tense. I can sleep better, there’s less competitiveness and more support”—and a chance to audition for a role in Footloose, to open at Chan in January, a musical he compares with Grease, set in book-burning, ban-the-dancing Oklahoma.

Meanwhile, a chance to represent the theater wearing his ubergorgeous Joseph coat atop a VW convertible in this year’s Twin Cities Pride Parade: “Here I was, in Downtown Minneapolis, with my dearest friends watching, so glad I’m back. My boyfriend came, and so did his parents!”

As Bujold puts it, “I’ve always been completely out. In college, in Fargo-Moorhead, there were a lot of closeted gays, which was an accepted part of the [gay] culture. But how could they be true to themselves that way? The message I get from Joseph is: Have faith in yourself.” And keep on auditioning.