The Brass Rail bar at 422 Hennepin Avenue, Minneapolis, closed—for the time being—at 2 AM on January 27. A sign on the door reads: “Temporarily Closed For Remodeling”—which is the spin circulating through the bar-going community. But the real reason for the seemingly abrupt demise of the club in its former incarnation is more complex. 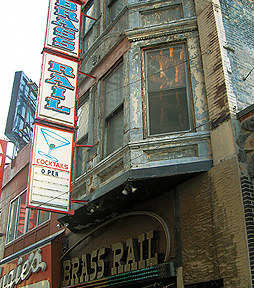 Since 1974, the Brass Rail has been a gay bar—a mainstay on Hennepin Avenue. In 2007, Johnny Vieau bought both the business and the building. Later that year, he sold just the building to Peter Hafiz, who subsequently purchased the Gay 90’s in 2008.

The Brass Rail reportedly had been experiencing major financial difficulties for some time prior to the closing. Sources indicated that it was months behind in paying rent to Hafiz.

What does the future hold in store for this venerable landmark?

Hafiz plans to reopen the bar in several months after a much-needed facelift. It will continue to be a gay establishment. Although he’ll operate it directly, to the average person, it should appear pretty much the same as previously—offering a friendly ambience with plenty of entertainment.

During the transition, Hafiz invites patrons of the Brass Rail to feel welcome at its larger sibling, the Gay 90’s, just a few steps away. For the past 35 years, the two bars always have enjoyed a symbiotic relationship.