Actually, it’s show time three times a day, seven days a week here, because it’s…Branson! And that’s what put this pocket of the Ozarks on the map. And (here we go again) it’s…affordable! Tickets run around $30. You can’t even leave the airport for that price in Vegas. Speaking of airports, for the first time ever, you can fly nonstop to Branson, where Sun Country now delivers folks to the brand-new facility that opened in May. 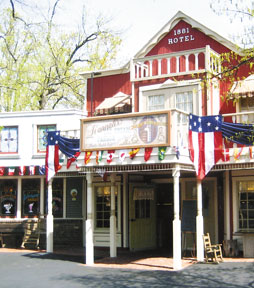 OK, maybe no white tigers prowling the stages of show palaces here, but live animals? Sure! Everything from the cruise members featured in a Noah’s Ark production to the ponies and longhorns in Dolly Parton’s Dixie Stampede.

Among Branson’s 50 stages, an Elvis impersonator, natch, and another starring the country-singing Presley family. They were pickin’ their fiddles here long before the Velvet Voice was born, back when Branson’s eight-mile strip amounted to a dusty block or two. Over at his own show palace, Roy Rogers Jr. sings “Don’t Fence Me In” just like his dad used to—some things never change—while the six groovy guys over at Six are a hot new item.
Crooner Andy Williams, at 81, has taken a furlough from performing, but he still is glad-handing guests nightly at Moon River Café, which salutes his mom’s style of home cooking—chicken pot pie, meatloaf, pot roast, mac and cheese—as well as items considered suspect in Branson not too long ago, such as elite quail with apple-raisin stuffing aside a glass of Pinot Noir, for instance.

This is not your daddy’s Branson anymore. Oh, the shows still all end up praising Jesus and the flag, but when I boldly asked if gay guys were welcome, they countered my question with: “Honey, who do you think’s doing the singing and dancing in all those shows?” Without the boys in the hood, the shows would not go on, and the sequin industry would need a bailout. Besides, in what other town in Missouri would you get paid for wearing mascara? So, pack up your boots and jeans (and sequins), and come on down.

Or, skip the suitcase. These days, you can shop for hot rags at Branson Landing, a snazzy new festival shopping/entertainment district where Main Street (AKA The Strip) pours into the White River as it weaves through the rolling Ozark foothills. Right there on the riverbank, overseen by outdoor cafés, the best choreography in town is on offer hourly—and free. It’s the heart-stopping Fire and Water display of shooting flames and rippling, soaring fountains crafted by the same designers as the Bellagio’s legendary outdoor act. Vegas, eat your heart out.

Atop those hills overlooking the river stands Candlestick Inn, Branson’s answer to fine dining for more than 60 years, while on the Landing side, you can catch your own trout for dinner (stopping first at nearby Bass Pro doesn’t hurt). Want to catch some guys you’ve seen onstage instead? After the show, they head to the Landing’s Bar Louie.
Just a block behind the complex’s glam new Hilton stands Historic Downtown Branson (they pronounce all the capitals) of a hundred years ago, a sweet jumble of antiques shops, quilt stores, candy makers—and that throwback to another era, a Five & Dime (“where shopping is fun again”), a good place to pick up those special touches for an evening out, from bandanna to feather boa…or aspirin.

Bisecting old and new is Branson Scenic Railway, where, for a couple of bucks and a couple of hours, you can climb into a Vista Dome to careen through the soft, green hills where bushwhackers hid out among the dogwoods after the Civil War. Today buzzards, ever hopeful, circle.

That’s one of the 20-some attractions Branson boasts for bouts between shows, ranging from miniature golf and kayaking to museums. Yes, museums. But they’re more like attractions—no velvet ropes. Best is the new Titanic exhibit, built to scale to resemble the fated ocean liner, showcasing more than 400 retrieved artifacts, including postcard messages never mailed and photos from recovered negatives. Proceed past the “British chambermaids” up the grand staircase to the staterooms; the cold, dark outdoor promenade; the iceberg itself; the lifeboat.

At the Roy Rogers Museum, attached to his show palace, meet Trigger (stuffed); Roy and Dale Evans’s boot and gun collections; the many hit records; and the multitude of products he endorsed—lunchboxes to flannel PJs with his smiling face—another blast from the past.

So is Mel’s Hard Luck Diner, featuring waiters who deliver your eggs and grits, then grab a mike, and belt out “Take My Heart” or a Pasty Cline number underneath her autographed photo.

OK, you do pay extra to eat, but the fare rises far above the usual theme-park food: double-battered fried chicken with mashed potatoes and cream gravy; pulled pork and barbecued ribs; big bowls of succotash; and ice cream—in 22 flavors, to be exact, the park makes 40 gallons fresh a day. Silver Dollar City’s newest addition is a Culinary Center, where lessons are given, so you, too, can gain braggin’ rights to country cooking.

Requires a sip of vino, right? Well, here’s a “who knew?” for you. Stone Hill Winery, with free tours and tasting room right off the strip, was the nation’s second-largest winery back in 1900. Today, its medal-winning wines include the robust, ruby Norton and dry, fruity Vidal Blanc. Lindenel Wine Garden, another local winery, overlooks the bustling strip.

Time to leave? Well, it never is. But y’all come back, as the good folks around here are quick to counsel.