Boy I Am: Gloriously Messy Look at FTM Experience Now on DVD

Now on DVD, Boy I Am, the documentary that has been causing such a stir in transgender circles, is the ultimate mixed bag. On the one hand, it’s a deeply substantive inquiry into female-to-male (FTM) transgender experience that merits a vast audience beyond trans circles.

On the other hand, it’s chock-full of so many different viewpoints about so many aspects of trans experience, feminism, race, socioeconomics, gender identity versus gender expression—the list goes on—that it loses focus, and hence the transformative power, its savvy codirectors Sam Feder and Julie Hollar could have elicited. 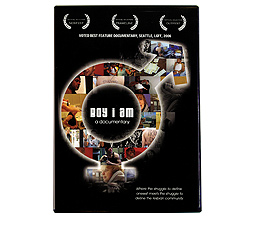 Nonetheless, Boy I Am is a film that should be seen and seen again, simply because it journeys into the complex nether reaches of gender issues. And the disentangling and deconstruction of gender issues on a massive scale actually might get society off its current merry little path to self-destruction. Few documentaries are so dense in such radical, if not radicalizing, information.

Anyone with a pulse who sits through the whole film will be amazed at how much for the better the transformation is for those three.

Norie learns firsthand through transition the ways in which black males are stigmatized as dangerous. Keegan comments on class issues and affordability of surgery. Nicco is eloquent in his descriptions of long having felt disconnected from the physical body into which he was born.

The paradox of physical pain and psychological freedom that comes from binding of the breasts is highlighted. Ace bandages and sports bras can be intrinsic to FTM experience at its most fundamental.

Regrettably, you have to wade through all kinds of varied commentary—much of it pat stuff we’ve heard before, and much of it fascinating—from other people. This scatters the focus away from, and disempowers, the ultimate impact of the three subjects.

Perhaps Feder and Hollar feel they must play catch-up. After all, society has been exposed much more to male-to-female (MTF) experience than to FTM experience. FTMs are up against their own unique set of obstacles that MTFs are not. This has nothing to do with which faces worse odds, or better. It’s this different set of obstacles that Feder and Hollar earnestly have researched. Their research really merits another film—or two.

The richest exemplars of this research are the film’s interviews with Judith “Jack” Halberstam, Professor of Gender Studies at the University of Southern California, and Carmen Vazquez, Deputy Executive Director of Empire State Pride. I could listen to these two for hours. Their segments exude insight. I still wanted to hear more background regarding how they arrived at some of their views and conclusions, but the time-driven documentary format inherently precludes that.

Feder and Hollar bravely air dirty laundry that a lot of sexual revolutionaries prefer to whistle past.

For instance, the women’s movement periodically has been hostile to trans folk, and lesbian feminist separatism at times has been intolerant. The standard image of internecine GLBT intolerance is the gay man who insists on “straight-acting” men for his bedroom and his public image. But lesbians have a rough equivalent regarding not so much intimate partners, but inclusion within lesbian social circles. And that can impact intimate lesbian partners.

Vazquez points out that discussion of differences between gender expression and gender identity has been silenced among some in lesbian culture. The butch/femme dichotomy that was important in more closeted eras for “passing” in a lesbophobic society now is seen by some as anachronistic and self-loathing.

What if a woman genuinely feels she wants to express her gender in classic butch terms? What if being a male-identified woman is her inherent self-expression, but she feels no need to transition surgically? And vice versa: If she wants to transition? Who is to speak for her by saying she’s wrong or self-loathing in either case?

Misplaced feminism can oversimplify FTM concerns by labeling surgery as a cop-out—if you change your body, you’re not facing the reality of being a woman. Out of this can of worms, one can shoot back that feminism is at its core about one being totally in charge with full self-determination of one’s own body—autonomously, and completely, no matter what.

One interviewee reflects that feminism is trying to have women come to terms with their bodies as they are, but transgenderism is about not coming to terms with one’s body as is.

Halberstam dares to suggest that younger people’s bodies are changing, and surgery may or may not be the right thing at a given time. Peer pressure may be more involved in persuading someone to make the change.

Although sexual activity and gender identity have come to be held militantly to be in separate categories by many gender theorists, sexual expression often is genderized. (Thank you, “Jack,” for saying that. I can see that really rattling some people, but you’re right.)

Moreover, if people have had few, or only negative, sexual experiences, they may not know themselves as fully as they should before deciding whether to change gender.

What if one’s sense of self has yet to distinguish between being reactive and being authentic? Let’s be honest: It can be a tricky distinction.

Other considerations: Hormones are available illegally on the street; needle infections can cause HIV/AIDS; and socioeconomic barriers can make surgery and hormones accessible to some and not to others.

In sum, Boy I Am is a feast of food for thought. The questions it leaves open need to be addressed in future documentaries. Until then, though it’s far from flawless, it’s the gold standard.