“The mission of The Breast Cancer Awareness Association is educational and inspirational: to fulfill the needs and desires of survivors, families and friends for information on the broad spectrum of breast cancer treatment and support services in Minnesota.” 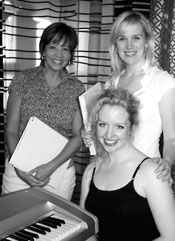 Bloomington Civic Theatre (BCT) and The Breast Cancer Awareness Association (BCAA) of Minnesota are joining to present a fund-raiser entitled The Breast of Broadway: A Musical Journey of Hope on July 11 for one night only. A wine and hors d’oeuvres reception starts at 7 PM, with a concert following at 8 PM. Champagne and dessert will be served afterward. A live auction will take place, with the proceeds benefiting both groups.

Anita Ruth, who was named Lavender’s Best Theatrical Music Director last year, will direct the music. The vocal talent featured is top-notch, with music from composer greats like Jonathan Larson and Stephen Sondheim. Karen Weber, who stunned audiences last year in BCT’s A Little Night Music, will bring her soaring delivery to the show. Denise Tabet, one of the best musical comedians on the regional theater scene, will infuse the festivities with her gritty trademark wit. Other performers include Tracie Hodgdon, Kevin Leines, Robben Salyers, Tiffany Seymour, and Emily Rose Skinner.

BCAA, community-based like BCT, is the only organization in Minnesota whose sole purpose is to educate and support individuals, families, and friends living with breast cancer. For instance, a full-day educational program registration for its Living With Breast Cancer conference runs an actual cost of $179, but thanks to donations, which are tax-deductible, it can be offered at $59.

BCAA was the brainchild of President Ann Harris and Vice President Lois Joseph, both cancer survivors.

Joseph says, “We take pride in the fact that we are a community-based foundation, created to educate and empower every segment of our local population about breast cancer. The fact that the Bloomington Civic Theatre is a community-based theater makes the partnership a wonderful joint effort.”

The Breast of Broadway producer Bonnie Erickson was diagnosed at ages 16, 20, and 24 with various forms and degrees of cancer—breast cancer being one.

Erickson shares, “All were caught very early, and my treatments involved traditional, although short-term, chemo and radiation therapy, and visualization therapy learned from studying the work of Dr. Deepak Chopra. I never lost my hair, although I did shave my head to spite my mother. I had already spent years cheating death due to drug and alcohol abuse, in addition to living a dangerous lifestyle.

“I had actually concluded I would be dead by age 32. I continued to lead a life that disrespected my earlier survival, i.e., four packs of cigarettes a day for 18 years, certified skydiver, high-speed motorcyclist, five marriages—and theater. Currently, at age 55, I have developed a much greater appreciation for life.”

Erickson continues, “When the concept was brought to me to model a fund-raiser after a well-known Broadway fund-raiser in New York, I was committed to the project right away. I have attended many cancer benefits in my 31 cancer-free years, but there rarely was a message. I know from experience the ups and downs of this journey, and what you experience along the way is varied: loss, hope, friendship, humor, abandonment, shame, devastation. The list goes on.

“With this show, my hope was to put a new face on cancer. When I joined forces with the remarkable music director, Anita Ruth, we decided we would look cancer straight in the face, and call it what it was.”

Indeed, the spirit of hope and empowerment will shine through humorously and resplendently with such tunes as “Bosom Buddies,” “I’m Still Here,” “Not While I’m Around,” and “Seasons of Love,” among others.

So, you can believe there’s hope!