The one-and-only Bitch Flowers hosts Bitch-N-Brunch on Pride Sunday, June 27, 10 AM-3 PM, at Seven’s Rooftop Lounge on Hennepin Avenue in Minneapolis. This Lavender Summer of Pride event is a benefit for The Aliveness Project.

Lavender recently interviewed Flowers about a number of topics. 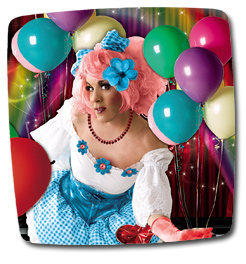 When did you begin performing, and what prompted you to start doing drag?

Bitch Flowers is a character that I created in the late ’80s. I was more of a club character at the time. I then moved to New York City. It was in New York that I learned from other club kids and drag queens to perfect her image.

How did you come up with the name Bitch Flowers? Do you ever get political-correctness flack because of the “bitch” in your name?

I have never been given any flack from people because of the name. It has been my experience that most women who have strong character, unique style, and big personality are often called “bitch” behind their back. You know, like that girl who walks into a club, completely dressed to the nines, and knows the staff and management, and the DJ. The bartender knows her drink. And, of course, she has her own table. There is always a group of girls standing nearby, all dressed somewhat alike. You know, no personal style. They would whisper to each other—referring to that woman as a total bitch. I wanted to be her. “She” was my inspiration.

When and where do you perform?

As far as performing, I throw an annual event at the Varsity Theatre every spring: April Showers Bring Bitch Flowers. It’s a drag variety show, and my birthday event. I also perform for private events and fundraisers.

What is Bitch-N-Brunch, which you’ve done in previous years? How and why did you connect with Lavender for this year’s event?

Bitch-N-Brunch is in its third year. I started it with Seven as a fundraiser and a fun event to bring the community together to watch the parade, and have a great time. After last year’s event, Barry Leavitt approached us about Lavender being a part of the Brunch. I liked the idea of being able to raise more money for The Aliveness Project by our partnering.

I would just like to add that I am so pleased with the love and support that I have received from the Twin Cities at each of my events. It’s so great to see how the Bitch events have brought together not only the GLBT community, but the nongay community has also embraced the events. In fact, at this year’s April Showers event, more than half the guests were women. Many groups of gals left their husbands at home, and made the Bitch event a “girls night out.”