Bisexuality and the Space Between Binary Categories

Robyn Ochs is a major educator, activist, and advocate for bisexual issues. Editor of The Bisexual Research Guide and of Getting Bi: Voices of Bisexuals Around the World, she has taught courses and facilitated workshops ranging from the politics of sexual orientation to transgressing binary categories of sexuality and gender imposed on us by society. In 2004, she married Peg Preble, her longtime life partner, on the first day same-sex marriage became legal in their home state of Massachusetts. 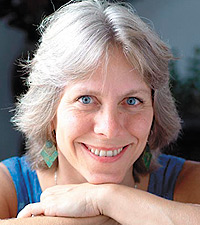 Ochs recently shared with Lavender some of her views about bisexuality.

Tell me about how you came into consciousness about your bisexuality.

I was a teenager three decades ago, before the Internet; before one could turn to the omniscient Mother Google for answers to our questions; before there were lesbian, gay, bi, or trans characters on television series, or even on talk shows. Though there were gay people in my life, there was deafening silence on this subject, so I did didn’t know at the time that they were gay. Thus, I grew up never questioning my heterosexuality. In fact, I wasn’t aware that there was a question to be asked.

Then, during my first semester at college, I fell head over heels in love with another woman. I was terrified at what this might mean, and was afraid to tell anyone. I questioned whether I was really a lesbian, whether my past attractions to men had been real, and after considerable reflection, realized, no and yes.

I was convinced that if came out as bisexual, my straight friends would reject me, and I knew that the lesbians on my campus did not like or trust bisexuals. So, for five years, I confided only in my journal. Finally, in 1982, a coworker came out to me as bisexual, and I said aloud for the first time that I was bisexual, too. The world didn’t end, and I felt so relieved. After that, coming out got a lot easier.

If only there were clear lines! But, of course, there aren’t.

In one of my workshops, I have people fill out an anonymous one-page questionnaire. People are asked, among other things, to place themselves on a sexuality continuum from zero to six according to their overall score, and according to their behavior, fantasies, sexual and romantic attractions during different time periods—in the past month, before age 16, and overall. They are also asked what word or words they use to describe their sexual orientation. Once completed, the questionnaires are collected, shuffled, and redistributed, so that everyone in the room is now representing someone else in the room.

We then look at the data. It becomes clear that many people’s location on the scale varies depending on what period of time, and on whether you are referring to their behavior, their fantasies, etc.

Another consistent finding is that the terms “straight” or “heterosexual” are used by people standing not only on zero, but on zero, one, and two. The term “bisexual” is used by folks not only on three, but also on two and four—and sometimes also on one and five. The words “lesbian,” “gay,” and “homosexual” are used by folks not only on six, but also on four and five. There’s an overlap between categories, so someone standing on four, for instance, might identify as lesbian or gay, or as bisexual.

In no way am I saying that there are not people on the ends of the scale—there are indeed many. Rather, the categories of heterosexual, homosexual, and bisexual are broad, and encompass a wide range of experience.

You’ve noted that biphobia is the fear of “the other” and the fear of the space between our categories. Can you expand on that?

I’m very interested in biphobia—in its unique characteristics, and in its overlap with homophobia.

Bisexuals evoke discomfort and anxiety in others by the mere fact of our existence. We are pressured to remain silent, or to squeeze ourselves into one of the binary categories, as our silence allows both mainstream and sexual minority cultures to exaggerate the differences between heterosexual and homosexual, and to ignore the fact that human sexuality exists on a continuum.

It is much less threatening to those uncomfortable with homosexuality to perpetuate the illusion that homosexuals are those people—way over there, very different from heterosexuals. By othering us, heterosexuals do not have to confront the possibility of acknowledging same-sex attractions within themselves, and possibly becoming “like them.” There is considerable anxiety in being forced to acknowledge that the “other” is not as different from you as you would like to pretend.

For a long time, I was bewildered at the anger and hostility directed at me because I insisted on identifying as bi. The realization that part of society’s discomfort with bisexuals was about our challenge to binaries, and not really about bisexuality per se, depersonalized my own experience of biphobia, and made it easier to understand.

You have written about biphobia, and have made a distinction between “external biphobia” and “internalized biphobia.”

It’s clear that there are many negative prejudices and stereotypes aimed at those who identify as bisexual. But biphobia does not come only from the outside. We may carry our own experience of internalized biphobia: isolation, illegitimacy, shame, and confusion.

What are your thoughts on polyamory? I’ve had many bi friends over the years who say it can work, and who have had to make it work.

It’s funny—because I self-identify as bisexual, people tend to think that I have some expertise in the subject of polyamory. It’s interesting to me how often bisexuals are awarded guardianship of polyamory, and of nonmonogamy in general. To me, this seems quite silly. People of any sexual orientation can be monogamous or polyamorous.

To be honest, I’ve always preferred monogamy in my own romantic relationships. But this is not because I believe that monogamy is categorically superior to polyamory. Rather, it is what works best for me. I’m entirely prochoice on this issue, and I wish we would all relax, and respect other people’s right to make their own relationship choices.

What is your response to those who debunk the binary view, and say there are numerous genders: boy; girl; intersexed people, of course; and other new, and some will say sarcastically, gender-related forms of identity?

It’s clear to me that gender—like sexual orientation—exists on a continuum. People are very creative, and continue to construct new words and new categories to more accurately describe their experiences.

And here, I’ll come back to the concept of being prochoice. We each have the right to choose our own labels, and to change those labels if we later find another that works better for us. And I would encourage people to ditch the sarcasm. The process of self-labeling is very important and personal, and we’ll all be better off if we treat others with the respect we would wish for ourselves.

Your book Getting Bi: Voices of Bisexuals Around the World has gotten great acclaim. Tell me about your concerns and hopes about bisexuality in global terms in the coming years. There are so many parts of the planet that are so erotophobic, even when it comes to vanilla heterosexuality.

Getting Bi is an anthology of short personal narratives written by people in 32 different countries on six continents who range in age from 15 to 79. It is about to be published in Beijing in Mandarin. We’re working on a Spanish edition, and also on a second edition in English, which will include some new material, with a few more countries represented, including Muslim voices.

My experience of putting together this book has clarified for me how much geography and culture influence our experience of identity, our understanding of relationships, of possibility, even of desire itself. That said, the Internet and globalization have had an enormous influence, and expanded our conversations across borders, creating increasing commonality in our experience.

I agree that there is tremendous fear of sex and sexuality. You ask about my fears and hopes. My fear is that in many parts of the world, LGBT people will continue to be oppressed, jailed, murdered—our full humanity denied. My hope is that our increasing visibility will result in an opening of hearts and minds, resulting in increased understanding and legal protections, and that these changes will spread, until more and more countries treat LGBT people as full members of society, and that eventually, we will stop obsessing about who identifies as what, or whether our partners are male or female.

Getting Bi is an excellent place to start, as it is recent, it represents many different voices and perspectives, and it includes a bibliography of other resources.

There are lots of other good books out there. My all-time favorite, with the exception of my own book, is Bi Any Other Name, edited by Lorraine Hutchins and Lani Kaahumanu. And Bill Burleson, who, I understand, sometimes writes for your magazine, has written a book called Bi America. Authors Paula Rodríguez Rust, Lisa Diamond, Beth Firestein, Ron Fox, and Ron Suresha all come immediately to mind for those interested in research or a more academic approach.

Tell me about the work that you do?

I travel around the United States, and occasionally beyond, speaking on campuses and at conferences on bisexual identity, on identity and labels, on homophobia, and on marriage equality.

I’m also working up some new programs for the coming academic year that are based on skill-building and idea-sharing. In my travels, I see so many creative ideas, and I like to be a sort of Johnny Appleseed, spreading these ideas around.

Another thing I give—and get in return—is perspective. A student in Wyoming once told me that, as someone from a marriage-equality state, I was like a visitor from a future that he hoped to live in someday. And his gift to me was a reminder that there are so many brave, amazing people throughout this country being role models and making change in places that are sometimes very resistant—even hostile. These people are my heroes and s/heroes.

At times, I feel I am holding apart the walls of the binaries that are pressing against my reality, threatening to suffocate and flatten me. By affirming and drawing attention to the space between, I am creating for those of us who need it more space to exist, more air to breathe. And in challenging one false binary, I challenge them all.

In this way, I see a clear connection between the bi, trans, and intersex movements, and with multiracial and biracial movements, and with everyone who affirms complexity. Our diversity is exciting and beautiful—something to be embraced, not denied. Remember: A normal person is just someone you don’t know real well yet.