On September 25, Bingo A-GoGo hosts its 25th extravaganza. Lee Haugee, Clare House Events Director, recently told Lavender about the history of this sterling event, from the very first one, “Gobbler Games,” on November 23, 2002, at the Church of the Incarnation in Minneapolis. 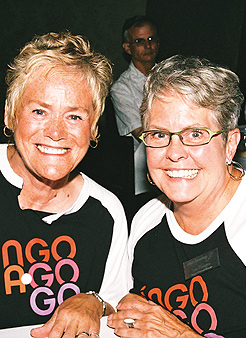 Haugee, whose involvement goes back to the very beginning, remembers, “I was one of two early investigators into the prospects of being able to produce an event in the GLBT community that would be as successful as the Gay Bingo events held on each coast in the late ’80s and early ’90s. Barb Anderson, the Director of Park House, and I pulled numbers and did research, and questioned a few colleagues.

“From those early folks, we formed a fabulous committee, and together, we launched Bingo A-GoGo. Through the years, Shannon Regan [Park House Volunteer/Special Events Director] and I have become the Bingo Babes. Together, we have done everything from tables and chairs for 500 people to rounding up game and raffle prizes to securing sponsors and running the show. The past three years, we have been lucky to have the incredible help of a team of colleagues at Carlson Marketing to help with the actual production aspects.”

Bingo Babes? What, exactly does being a Bingo Babe entail? Is it like being Lindsay Lohan without doing time?

Haugee shares with relish, “Being a Bingo Babe means that you must always be on your best behavior. Case in point: I was chatting away at a garage sale, when someone came from around the corner: ‘You’re one of the Bingo Babes! I’d know your voice anywhere!’ Bingo Babes have many, many friends, due to all of our multitasking. We solicit sponsors and donors; we recruit at community social events à la First Thursdays and Pride; and we wear funny costumes.”

According to Haugee, “Most of all, being a Bingo Babe is the most fun any babe can have! It really puts things into perspective, and when you work in a field with sadness, you must forge on with a sense of humor. And, we aren’t anything like Lindsay—we wear underwear!”

Haugee confides, “Most people think that Shannon and I are partners. I have been married 40 years, and have 4 grandchildren. Shannon is a good Catholic girl with a history of beaus and suitors. Not that either of us would mind being from the island of Lesbos—we just don’t have the carpentry skills.”

As Haugee recounts, “When we opened the doors at Incarnation, we had no idea what to expect. Well, people were lined up around the block. We sold over 400 tickets! We finally moved to the Zuhrah Shine Center when we outgrew Incarnation. In October 2008, we moved Downtown to the Hyatt Regency Minneapolis for ‘Broadway Bingo,’ with a bigger event twice a year. We’re hoping for 600 attendees for ‘Boob Tube Bingo.’”

Miss Richfield 1981 is a Bingo A-GoGo staple, of course, Other personalities who have shone and shown over the years are Barbie “Q,” Miss R’s sidekick and costaple; Cheer Dorothy Cheer; Gosh Alice Jones; and Jason Matheson.

Haugee relates, “We are quite sure that Bingo A-GoGo has produced more events than any other AIDS service organizations in the Twin Cities.”

Finally, Haugee cautions, “Even though we don’t hear as much about HIV/AIDS, it is still crucial that our community continue to be aware of the disease. Because we don’t hear about the number of people dying with the disease, the general public assumes that the crisis is over. In truth, the number of infections continues to rise, and the need for the services we provide becomes even more important.”