I vividly can recall the day Johnny Hughes drove up in his black jeep with his Rolling Stones cap on his head. Our son, Corbin, was meeting his “Big” for the first time. A match coordinator from Big Brothers Big Sisters (BBBS) of the Greater Twin Cities was on hand to facilitate that initial meeting, and get the mentoring match off on the right foot. The connection was instant. Johnny and Corbin’s first activity was walking the dogs at the Animal Humane Society. 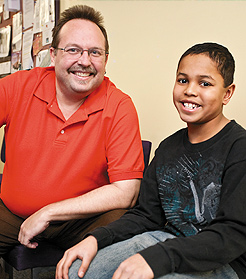 Four years later, the two sound like old friends when they talk on the phone, and make plans to hang out together.

My oldest son, Quintin, was fortunate to be matched with an equally fitting mentor. He and Rob Reidy spend time barbecuing, going to sports games, watching movies, or getting a bite to eat.

As lesbian moms, my partner, Linda, and I could not be more grateful for these two men who have devoted their time and interest to our sons. January is National Mentoring Month, and it’s a time when I reflect on the immeasurable gift that Johnny and Rob have given to our sons.

BBBS of the Greater Twin Cities has been matching “Bigs” and “Littles” for more than 90 years. Last year, it served nearly 3,400 kids in 10 counties in the Twin Cities metro area.

As a previous volunteer and now a new staff member for the agency, I’ve talked about it with many individuals from the GLBT community. I often hear the perception that it is not open to GBLT volunteers. In reality, the agency welcomes mentors from all communities.

Jane Bowman, Bruce Rehberg, Chas Salmen, and Russ Testa are four mentors who have served as openly gay and lesbian Bigs. I hope their stories inspire you to serve one of the hundreds of young people who currently are waiting for a mentor.

Russ and Chas, who said that they sought to do something bigger than just the two of them, shared, “We wanted to do something together that would stretch us beyond our friendships and dinner parties.”

Both men enjoyed spending time with kids, and discovered the option of enrolling in the Big Couples program at BBBS. This program matches couples or colleagues with a “Little.” They were matched for two years with their Little.

Reflecting back, Russ states, “No matter how busy you are, everyone has some discretionary time. Why not spend it doing something like this that impacts someone’s life directly?”

BBBS encourages and often hosts low-cost or free activities for matches, but ultimately, Bigs and Littles decide on how they spend their time together, based on common interests. Memories of doing simple activities—like cooking together, working in the garden, or playing Uno—were the most meaningful for all of them.

Jane, a St. Paul attorney who is a lesbian, and Ashley, a St. Paul teen, spent their first few meetings getting to know each other, and exploring the Twin Cities. I spoke with them at the State Capitol after they had just met with Senator Scott Dibble.

Bowman recounts, “Over the past two years, we met with a judge, sat in on my friend’s Minnesota Public Radio show, and have done a lot of cooking together.”

Ashley is a quiet 14-year-old, and Jane’s goal is to share a wide variety of experiences with her. Jane, who had a middle-class upbringing, often is struck by the challenges in Ashley’s life.

Of the kids served by BBBS, 90 percent come from single-parent families, and 76 percent are in low-income families. An increasing number of children are in the Mentoring Children of Prisoners (MCP) program.

Bruce, a Coon Rapids resident, has been a Big for more than two years. He has participated in volunteer orientations, sharing his experiences and photos from all the adventures that he and his Little Brother, Eli, have had.

Believing that being a gay male has been positive for his relationship with Eli, Bruce explains, “I’ve been accepted for who I am. I tend to bring the softer side of things to the relationship, and show that there are lots of things out there in the world to experience.”

Bruce and Eli’s list of activities, which is long and varied, includes shopping for a soldier through “Soldier’s Angels,” driving around to look at holiday lights, riding bikes down by the Mississippi River, attending a Twin Cities Gay Men’s Chorus holiday concert, and going to the Living Green Expo.

In addition, the two have attended many agency-sponsored events, such as karaoke night, a day at Grand Slam, and the annual Metrodome (now Mall of America Field) Holiday Party. They even performed a musical comedy routine at last year’s BBBS Talent Showcase at the Mall of America.

When asked about a particular memorable outing, Bruce thought for a while, then pointed out the time he picked Eli up, and his mother warned him of her son’s mood.

Bruce recalls, “Once we were a few blocks from his house, his mood changed. Apparently, he wasn’t interested in doing his math homework. We happened to be going to The Works in Edina. One of the exhibits was on binary. Eli picked up on it really fast, and even said it was easy. I said, ‘See, you are good at math. The binary stuff is really hard.’ Afterwards, he went home, and finished his math homework.”

All four mentors spoke of their initial worries of the time commitment, and of being “out” to BBBS. Looking back, they all agree that every hour being a mentor has been time well spent, and that being gay or lesbian was never an issue.

As Bruce puts it, “It is a good way to be an ambassador of our community into someone’s life that might not otherwise have the chance to know or meet someone who is gay. Believe it or not, if you accept them for who they are, they will accept you for who you are.”

Better yet, you may change a young person’s life forever.

Laura Smidzik is past Executive Director of Rainbow Families and Project 515. She now is recruiting “Bigs” at Big Brothers Big Sisters, and seeking a Master’s in Divinity at United Seminary.