In a country where the words “good” and “Christian” are used as synonyms, choosing a different spiritual path can incite disapproval, if not outright censure. 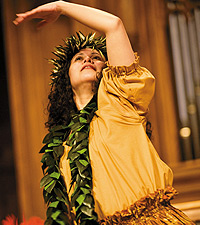 But after Todd Bierbrauer—who is now a hula kumu, or teacher—first experienced Hawaiian culture, there was no turning back. It wasn’t just that he found Hawaiians to be a friendlier, more open people. It was also their traditional belief system, which has more respect for natural forces, and considers every person to be a valuable, beautiful part of creation.

“You know,” Bierbrauer says, “it really took a lot of weight off my shoulders. I think in organized religion, there are just so many rules and guidelines—you can’t do this, you can’t do that. To me, it just doesn’t fit. With this spirituality, a lot of the bricks that we hold on our shoulders in the gay community just seem to fall off. It was a really nice feeling.”

Traditional Hawaiian spirituality is a bit of a sphinx to the Western mind. It is an alien concept to think one fully could comprehend Judeo-Christian philosophy by singing hymns. We very much are accustomed to a system of lecture and occasional reprimand.

But to the native Hawaiian—or dedicated hula student—to learn a dance or a chant is to experience a oneness with Hawaiian history, its people, and the creative forces of nature. It’s a complicated thing to explain, so perhaps the best way is to proceed as a Hawaiian might, and simply recount one version of how hula began.

Two young women, Hi’iaka and Hopoe, rested one day in the shade, and observed the beauty of the forest. They watched the branches creak and sway overhead, saw birds flitting about, and listened to the sounds of a nearby stream. Entranced, they both expressed a strong desire to understand the language of the forest, saying, “It is so old, it must be very wise, and able to teach us many things.” Their request was heard by the forest goddess, who sent Hopoe this knowledge in a magical dream. She in turn taught Hi’iaka. The two friends thus were gifted with the ability to understand the forest, and communicate its stories through dance.

The resulting synthesis of body, mind, nature, people, and history is an extraordinarily beautiful thing to witness. Additionally, hula functions as a language. Each movement has a meaning, and every dance tells a story.

Unfortunately, ask most people what comes to mind when they think about hula, and a grass skirt is almost certainly the answer.

Bierbrauer is quick to correct that association, noting, “No, throw that out the door. That whole coconut bras and long grass skirts thing is really just for show. And, actually, that type of dance that people usually see at a luau—that’s not Hawaiian at all. That’s actually Tahitian.”

To get a quick lesson on authentic hula, Bierbrauer recommends visiting You Tube, and searching for Hawaii’s premier hula competition: the Merrie Monarch Festival. Started almost 50 years ago, it was inspired by the memory of King Kalakaua, who was responsible for restoring traditional practices of Hawaiians after Christian missionaries had declared them taboo.

Hula now is taught around the world, from Polynesia to Tucson, Arizona.

Bierbrauer, who began studying hula in 1993, teaches hula classes right here in the Twin Cities. His halau (school) offers beginning and advanced classes. Students from the latter perform frequently around the Cities. Upcoming dates are listed online. The classes attract a wide range of people.

Bierbrauer explains. “I’ve been really lucky, in that I’ve had a really diverse group of people who come in from all walks of life. It’s not just one thing where you get the pagan side—a lot of them are Christian. The only thing I wish I had is more guys! I think guys have this idea in their head that it’s feminine, but the men dance completely differently.”

The dance itself is ideal exercise for just about anyone.

As Bierbrauer points out, “What’s really nice about hula is, if you have knee problems or back problems, anything like that, hula is a great exercise, because it’s low-impact. There’s no jarring motions. And for people who want to lose weight, it’s a great way to start.”

It’s difficult to quantify hula’s less tangible benefits, but for Bierbrauer, hula has been literally a godsend: “It actually gave me something I can believe in again, whereas I just found it so difficult to think that there could be a God out there that hates us so bad. It just didn’t make sense to me.”