So, you’re going out to a Twin Cities GLBT bar, but you’re starving and seeking someplace to eat. Why not try the food at the bar itself? You’ll find that our community establishments serve some of the best and most reasonably priced food in town. It’s a best-kept secret! 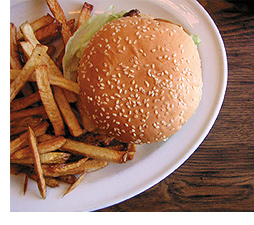 Here’s a brief overview of what our local GLBT bars have to offer our ravenous readers. Of course, menus often change, so check the Web sites on each issue’s “Twin Cities Lavender Bar Advertiser Guide” for the latest updates.

For more than a half-century, the venerable Gay 90’s in Downtown Minneapolis has offered a complete menu—from sandwiches and burgers to entrées like Rack of BBQ Ribs and Grilled Pork Chop—that seldom has changed over the years. Patrons always enjoy dining in the classic elegance of the main bar. A perennial favorite for couples is the Champagne Dinner for Two, with a choice of Ranch Steak or Jumbo Shrimp. Along with the remodeling of the entire premises, new owner Peter Hafiz and his staff plan to unveil many new culinary selections in the near future.

Reminiscent of the old Rumours on Robert Street in St. Paul, Innuendo’s kitchen serves a wide variety of appetizers, hamburgers, and pizza—plus the cleverly named Chick “Inn” Sandwiches. With the Grand Opening on October 3 of the bar’s big sibling, the new Rumours, currently under construction, the establishment will debut an expanded menu encompassing such items as hot sandwiches.

On September 8, the Minneapolis Eagle marks its 10th anniversary. Its Grill delights diners with everything from appetizers and pizza to burger baskets and chicken baskets. Specialty items include a turkey melt and a Reuben or Rachael, plus—of course!—the GLBT (guacamole, lettuce, bacon, and tomato). Currently, the staff is adding a number of choices, such as chicken satays and a chicken cordon bleu sandwich, as well as wraps like chicken caesar, chicken teriyaki, club, and veggie. Don’t miss the breakfast omelets and breakfast burritos accompanied by a Bloody Mary bar Saturdays and Sundays, 10 AM-2 PM.

Since it opened in February 2007, Pi Bar & Restaurant in South Minneapolis has featured a unique menu providing a wide variety of options. Select from appetizers, including the always-popular, minimalist-titled Tots, Very Small Burgers, and Mini Chimichangas; sandwiches, such as the GLBT (guacamole, lettuce, bacon, and tomato)—I guess this must be a trend in community bars; and scrumptious entreés with great names like Gaysian Wraps. The staff especially invites you to partake of the Sunday Brunch, served 10 AM-2 PM, which offers, among others, Pi Hole Scramble (choice of cheese and two ingredients).

Never in the club’s 31-year-history has the cuisine at the Saloon in Downtown Minneapolis been so impressive. The menu is a cornucopia of appetizers, burger baskets, grilled hot sandwiches, cold sandwiches, and salads. Daily Blue Plate Specials are a real deal: for example, on August 22, the day we went to press, hot chicken sandwich with mashed potatoes and gravy served over the top. Soon, fine dining—featuring steak, prime rib, and fresh catch—will be available Friday and Saturday evenings in the upscale ambience of the beautiful new Top Shelf lounge, with its official opening in September.

The remaining GLBT bars in the Twin Towns offer more limited but still delicious food options. The oldest local establishment, the 19 Bar in Minneapolis, serves pizza, sandwiches, hot pockets, and corn dogs. Governed by customer demand, the Brass Rail in Downtown Minneapolis prepares pizzas on weekends. On the other side of the river, Camp Bar in Downtown St. Paul goes next door to award-winning Key’s for delectable fare to satisfy hungry patrons. Last but not least, St. Paul’s oldest GLBT bar, the Town House, features appetizers (the newest item: egg rolls) and pizza.