Beginners Is Awesome New Film About Septuagenarian Who Discovers His Gayness

Renowned actor Christopher Plummer stars as a dad who comes out at 75—and enjoys it!

The general view of the coming-out process is that it happens in youth, or at some point in early middle age when you’re starting to sense your mortality. For the late Paul Mills, father of film director Mike Mills, it wasn’t until he was 75.

Plummer is best known for his portrayal of Captain Von Trapp in The Sound of Music, perhaps the sexiest romantic hetero lead performance in a musical film ever. McGregor was adorable in last year’s gay love story I Love You Phillip Morris, in which he played Jim Carrey’s significant other. 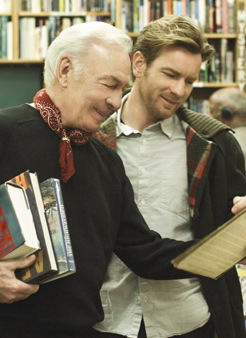 Be warned, however, that when you see Plummer and McGregor so up-close, personal, warm, and lovable, you may want to crawl up into the screen in hopes of snuggling with them. Plus, Cosmo, who in the film is Arthur, the pet Jack Russell Terrier, gives one of the cutest animal performances ever. This darling trio is enhanced with stellar performances from the dreamy Melanie Laurent and the zanily unpredictable Mary Page Keller.

Paul Mills, a World War II veteran, was Director of the Oakland Museum of Art. In the film, played by Plummer, he goes by the name Hal Fields. Mike Mills, portrayed by McGregor, is called Oliver. But it’s still Mike Mills’s own reflection of his relationship with his father.

I spoke with Mike Mills the day after a sold-out screening of Beginners at the Minneapolis-St. Paul International Film Festival.

When watching Beginners, I saw a straight son being loving, gracious, and extremely supportive of his gay father. Others in your shoes would not have been. Why and how were you so unconditionally accepting?

I had a lot of gay friends, and I went to art school in New York City from 1984 to 1990, and I lived there for a long time. And I have a lot of people I really admire that were involved in ACT-UP and The Grand Furies—the graphic design part of ACT-UP. So, in terms of gayness and all that, that was no biggie for me.

And it wasn’t as much a surprise for me as it was for Oliver in the film. In my real life, my oldest sister had told me when I was 18 that Pop was gay. But as families are so strange and silent with each other, no one talked about it. The impossibility of his being gay never really came up. So, it wasn’t that surprising. It wasn’t that shocking. It wasn’t controversial in any way.

And then, my mom had just passed away. I was really close to my mom, and was really dealing with that. You really feel like, oh, shit!—my dad’s probably going to go any second. But no. He comes out, and he rejuvenates and becomes so alive—becomes so young and fully there. I think that really influenced how I took the whole thing. You’re just happy he’s alive—that he’s more alive by being gay.

My father was a very gracious guy, very conscientious. I understood that it was very strange to have this man who was married to my mother for 44 years to all of the sudden have the hots for the UPS man.

And you were OK with that? You didn’t freak out?

My father, just in general, when he was a straight guy, could be a little self-absorbed or locked in himself. And sometimes, his gayness made him even more so, because everything had to be gay or about men.

I hope I don’t make it seem totally easy or without conflict or without some problems, but by and large, my gay dad was superawesome, and we had a much more engaged relationship than I had with my straight dad. He was more emotionally available. He was more fully there.

And, of course, the gay dad and the straight dad were the same man.

Exactly. But in my mind, they’re pretty separate dudes.

I was touched by the rainbow-symbol moment where he thinks most people don’t know what it means.

My dad ignored the gay world for all those years. He just did some weird trick in his head where he wasn’t paying attention to it. So, when he came out at age 75, there were a lot of things that my sister and I knew about the gay community that he totally didn’t know. So, he told my sister one day that that means Gay Pride. And Kate goes, like, yeah, everybody knows that. And he really didn’t think everybody knew that. He really thought it was somewhat code.

Yes. Bittersweet. Isn’t it the story of Rip Van Winkle, where he falls asleep forever, and then wakes up? [Dad] was sort of like that—where he was coming to, coming to consciousness. And in some ways, his straight kids knew some things more them he did.

Your mom had to have sacrificed some of her fulfillment. Mary Page Keller portrays her as mischievous and nurturing.

I love her. Mary is a very complex, smart lady who can get all the weirdness of my mom’s choices. I still don’t understand why my parents got married or what they did. I was born when they were 40 in 1966. I was an accident, so I’m a product of recreational sex between my parents. It’s not an easy way to look at them, and it’s part of what fascinates me.

They knew each other since junior high. They were old friends. My mom was married to someone before. It didn’t work out. And everybody’s rebuilding the world after World War II. They’re in that generation.

I loved the “moments in history” in montages you place throughout the film, like Presidents Eisenhower and Carter, and cultural elements of given years. You don’t allow us to escape the historical influences on the characters. We can’t do an easy, ahistorical judgment from our 2011 vantage point. But what struck me as most unique about Beginners is how you so organically juxtapose a senior citizen grappling with the ups and downs of coming out and gay love with his own son dealing with the ups and downs of a new hetero love. I don’t recall ever seeing anything like that in film or theater. What inspired and energized that?

What you’re particularly describing is very much what happened between my dad and me. When he came out, I was 33. When he passed away, I was 38. And I was very unsettled in my relationships, and very much wanted to be with someone. It wasn’t like I had a commitment problem. I could commit. I could love. I could be with people. But there were always ways that it could unravel.

So, our engagement just wasn’t nice and cuddly. It was also like, why are you doing that? Both ways. To each other. The film, to me, is a continuation of those conversations about love and relationship that we were having when he was alive. Just to the very end.

In that engagement, there’s genuine concern about each other. No judgments.

I think Ewan just so lives that in all his choices. [At recent San Francisco press events], everybody asked him, “Why do you do so many gay characters?” And he was perplexed: “Like, why not? It’s no biggie. I’m just doing a role. There are gay characters I haven’t done, because I didn’t think the part was good.” He really is pretty orientation-blind. Not in a political way—just natural and easy. He really brought that to life in a really sweet way. And he really adored Christopher.

Aside from being sexual-orientation opposites, you’ve mentioned your father and Plummer as “old world,” and you and McGregor as contemporary, sort of postmodern. There’s often a template in our heads that such generational polarities are irreconcilable. But not with you.

To me, that’s a huge part of the story—what it’s like to be born in that time. My dad would never complain about anything—so stoic. He wasn’t like the Great Santini—some macho dude. That was just that way that generation was.

Beginners will rock the mainstream world of the average The Sound of Music fan. Adjusted for inflation, the latter is the third-most-profitable film ever. And Plummer is utterly riveting in it.

Christopher is a very straight man—like a rake, a great womanizer. But I was aware that this is neat. The surprise that the audience is going to have that Christopher’s playing a gay guy—not unlike the surprise my family had with my dad, all of a sudden, not being a straight guy anymore.

And I think part of why my dad passed as straight is, he was pretty handsome, and he looked “right.” He looked like he was from “the right side of the tracks.” And it sort of just greased the wheels for his interactions in the world. And Christopher really knows about that. His regalness is like part of the character. Such a beautiful, handsome man.