“So…” I start a conversation with the young lady sitting next to me at Bedlam Social’s bar, as I sip my $3 organic merlot, “You here to see the show?” Yup, we both were waiting for the curtain of After Ashley, a gritty play called a “shrewd, dark comedy” by The New York Times. Me: And did you see the one last week?—Shakespeare’s seldom-performed Titus Andronicus. Yes, she says, I was in it. Me, too, chimed in the bartender. 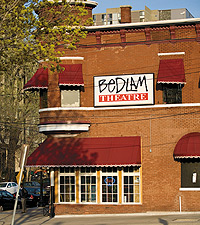 That’s Bedlam Social for you: the West Bank’s year-old hybrid of performing space, wine bar, café, networking service, and community center (oh, and bike-repair shop). It knocks Culture off its pedestal, and makes it as accessible (and addictive) as baseball. By design.

Bedlam Theatre actually has been alive and well on the West Bank since 1993, founded by Codirectors John Bueche and Maren Ward to stage theater that’s “radical and interactive, including lots of collaboration,” according to Bueche in the Cliff Notes version of its mission statement.

Who knew? (Well, besides awestruck critics.) The company had mounted its shows in a tiny, virtually unmarked space. Seeking room, and visibility, a year ago, it moved into a former dance club that had stood vacant for way too long (read: warped floors and other daunting fixer-upper tasks) to pursue its vision of “celebrating live performance arts as a social experience,” driven by a strategic focus that includes “developing a social hub identity at the intersection of artists, audiences, and communities.”

Broadly speaking, this translates to: “Come one, come all”; or “Hey, kids, let’s put on a show!” Bedlam’s own six shows a year are augmented by rental of its space and scene shop (itself the envy of many a performing group) to other local companies—“in line with our aesthetic,” Bueche hastens to explain—“not just plain ‘rental.’” In other words, West Bank Story, its own seminal production, yes; West Side Story, no. Thus, the hosted Ashley and Titus, along the ongoing late-night Dreamland Faces, a 1930s-type vaudeville routine, as well as bluegrass, jazz, puppet cabaret, and comedy performances, often two per night.

To connect community and performers even more strongly, Bedlam Social offers after-work and late-night happy hours at most-attractive prices, even giving performers in troupes elsewhere better deals to encourage dropping in. And whoever’s on the stage that night strongly is encouraged to stick around, and schmooze with us “civilians” at the wine bar.

Or in the charmingly frumpy lounge upstairs. Or on the open-air balcony, come summer, with its drop-dead view of the Downtown Minneapolis skyline. Or in the Fireplace Room, where Social Manager/head cook Jim Bueche, John’s brother, offers a menu that’s as offbeat and appealing as what goes on under the footlights. It features what he calls—ready?—Polish fusion food. That plays into Bedlam’s focus on connection, too—connecting with community, the earth that produced those products (“all local and organic”), and the simple Polish roots of the brothers’ heritage. Closing the gap between food and where it comes from is Jim’s mantra.

Dinner specials include Baba Yaga chicken, served with a beet salad and sides for $10; a kielbasa and pierogi plate; and Jim’s Polish pizzas, such as the John Paul II, featuring olive, sundried tomatoes, and fet—or how about the Polka Pizza, festooned with sweet potato sauce, chipotle chicken, and spinach?

The possibility of adding a wine bar-cum-café was a big reason to make the move to the new space, in line with what John Bueche calls “the national theater trend, and need, for theaters to diversify, and serve as a social hub: lots of ways to come in the theater door.”

Once inside, find a seat on a chair salvaged from the Science Museum, set upon risers discarded by Illusion Theater, perhaps after cuddling in a booth donated by Nochee Restaurant when it closed its doors—all in conjunction with Bedlam’s philosophy of building sets, and beyond, from recycled materials. The “green”-thinking company also offers a $2 discount on tickets to those arriving via adjacent light rail, on foot, or on bike (although a giant parking lot abuts the theater, too).

Bedlam’s own productions defy categorization, except these: According to Bueche, “They’re each unique—completely different every time—not what you expect.”

“Over the top,” Ward adds—as witnessed in the 2006 West Bank Story, which she calls “epic and historical, covering two centuries,” and molded from interviewing past and present residents. Or Terminus, a sci-fi show set in outer space—“We built a space ship around the audience,” she recalls. Or Shining Sea, documenting, in her words, “500 years of imperialism as a game show on TV”—political theater for the 21st Century. Every show is different, but you come away saying, ‘That’s Bedlam!’ via its playfulness, satire, sarcasm….”

Another radical mission is the company’s practice of deliberately fusing professional actors/directors with untrained people off the street, “which adds a raw quality,” Ward explains. “We make art, and we make artists,” Bueche underscores. “It’s a powerful outcome of how we operate.”

Thus, the Ten Minute Play Festival, which entered its seventh season, encouraged anyone at all to submit a script, or résumé, or simply just show up for auditions held on April 13. Tech help is welcome, too. “We need people to build sets, which lets them feel ownership in the project,” including 15 to 20 plays, and incorporating up to 100 people—“everyone who wants a role,” Bueche pledges. It ran May 28-June 1. Bedlam also sponsors an annual outdoors Bare Bones program, featuring 150 performers in a city park.

Putting its grant money where its mouth is, Bedlam sponsors drama clubs for kids, particularly youth living on the West Bank, where large families, low incomes, and recent immigrants coincide—“kids with no social services,” as Bueche puts it. “So, we hope to meet that need. We offer weekly after-school workshops that culminate in producing plays to which the community in invited.”

OK, down to the wire. Let’s try it again, John: What, exactly, is Bedlam? “Well, since 1996, we’ve been compared with the Guthrie, as in ‘There’s the Guthrie, and there’s Bedlam, and then, there’s everything in between.’” That’ll do.