OutFront Minnesota has named a new Executive Director. Amy Johnson, with more than 25 years of GLBT community service and advocacy under her belt, will guide the organization forward in this New Year and beyond. 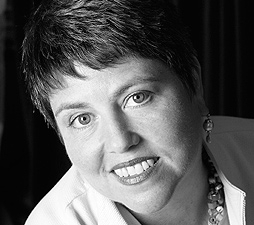 Johnson no doubt will utilize her legal knowledge and expertise when she spearheads OutFront Minnesota’s efforts to secure marriage equality in Minnesota, one of the first tasks on her agenda.

According to Johnson, those plans and efforts will not develop overnight. Enacting any marriage equality bill may take time, especially in light of the recent passage of Proposition 8 in California, as well as other defeats of same-sex rights in states like Arizona.

“Prop 8 is an interesting case study, and it does show not to take for granted that education and conversations—and not just sound bites and ads—are what it takes to change hearts and minds,” Johnson explains. “It really is grassroots organizing and conversations in workplaces. It’s alliances with our progressive partners and unions and communities of color and the transgender communities—all the different organizations around the state.”

Johnson feels it is realistic that Minnesota may become a marriage-equality state within a three- to five-year time frame. She points out that OutFront Minnesota is committed to a legislative approach on the issue, as opposed to a battle through the courts, but with a Governor who has pledged to veto such efforts, she believes major action may not be taken for a few years.

“We will, of course, work with the Governor, but is change going to happen today? No,” Johnson emphasizes. “That’s why OutFront is uniquely positioned to do this work to coalition with other organizations, because we need to engage the hearts and minds of Minnesotans. If a vote were taken today, we are not at all sure it would be there, so what we need to do is show legislators that their constituencies do care about this, and do want dignity and equality.”

Apart from marriage equality, Johnson relates that OutFront Minnesota will push for a safe schools bill in the legislative agenda this year.

The organization also will focus on its budget, which, just like those of American families across the country, will have to be looked at closely.

Leading the state’s largest GLBT advocacy organization will be no small task. Not only does Johnson have the confidence and skill set to do so, but also OutFront Minnesota’s Board Chair Michael Robins thinks she is more than capable.

“Amy brings outstanding leadership, vision, and energy to OutFront Minnesota,” Robins stated in a press release. “She has been a catalyzing force in other organizations, and we’re thrilled that she is bringing her skills and talent to this position. Her depth of experience in management and fund-raising, and longtime commitment to community advocacy, will serve the organization well. She’ll be a key asset in helping us move Minnesota forward to secure equal rights for all GLBT people.”

Johnson sums it up this way: “I am just thrilled to be given this opportunity, and I just can’t wait to wake up every day, and try to figure out how to make life for GLBT folks better. It’s just too good to be true!”